I’d stopped working on my birthday back in December, taking time off to enjoy the Christmas season. Throughout my entire career I’ve never enjoyed more than three weeks off, and that was during a period of long-term employment where vacation was capped at three weeks maximum. Even when I had three weeks I had to break it up between vacation and other personal tasks that required time away from work. This was different this time. This break was continuous.

Taking the Christmas season off from work was wonderful. I had nothing to worry about except finding and fixing one of the infinite number of little things that needed attention around my house, that’ve been collecting now for decades. So there was a deep sense of satisfaction in finally, successfully fixing those things, and knowing they were fixed.

I had every intention of continuing to work part time, and had discussed it with the owner of the company where I was working. But when I went back on 2 January to check my work computer back in and get a feel for the project’s computer network, I discovered that the environment I needed and had worked on so hard for so long was a mess. A big fat mess. I tried to do a bit of recovery and correction but there was no way for me to proceed, let alone succeed. So I made the decision to formally retire that day, turned in my badges, and left.

After a literal half-century of working and paying taxes into the system, I’d finally decided it was time to move on. Let those younger than I who can handle it, handle it.

My only regret is no longer working with some really great people. I have a near-infinite number of tasks to do around my house to keep me busy for quite some time, and I enjoy not having to make the daily commute from one side of Orlando to the other across the 408. But being in the company of good people and socially interacting with them is a cherished treasure, not to be lightly cast aside. I’d given considerable thought to just that issue in the months before I finally left, and the leaving is something that I’m going to have to sort out for some time to come.

The best way I believe I can do this is by forging new relationships with new people, through volunteer work. And that’s a path I’m slowly moving down. 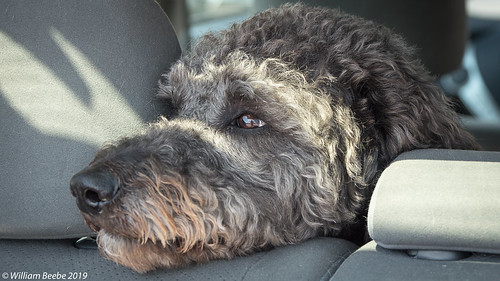 Today it’s Annie’s turn to be photographed. Annie’s a big four-year-old Doodle who will turn a big five in February on Valentine’s Day. Annie is our Special Needs Doodle. She’s OK most of the time, but every once in a while she goes crazy seeking assurances we love her. I don’t know why she has the moments of strong anxiety or what triggers them, but she gets them. The pass quickly and then she’s back to where her calm Labrador Retriever side takes control. She can be so sweet, and when she’s over on her back with her brisket bare for rubs, I look down and see that white heart-shaped marking and my heart melts just a little. It was that marking that inspired Annie’s name; the rock group Heart’s “Dreamboat Annie”, or just Annie. 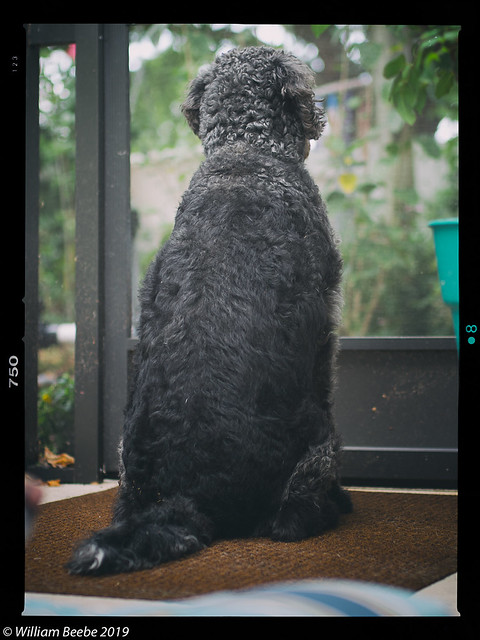 Many is the time where Annie likes to just sit quietly at the screen door, looking out into her big back yard. When she’s ready to go out she comes and lets me know, bumping me with her nose and then walking to the door where she turns back to look at me. Non-verbal communication, but quite clear to me.

Now that I’m staying home a whole lot more, both Annie and I look forward to spending more time communicating and sharing life together. She along with her big sister Ruby, and of course with the two Gingersnaps. All four are totally chill with one another.