Last October 2020 I signed up for State Farm’s “Drive Safe & Save” system to help save money on my car insurance. The deal was, you put a special dongle in your car, install their supporting app on your smartphone, sync the dongle with the app on your smartphone, and it would collect data on your driving. That was the way you could “prove” to State Farm that you were a “safe driver,” and thus warranted additional car insurance discounts. On the surface it sounded really good. Until, after six months of using the combination, I finally decided I’d had enough and removed everything. Here’s why.

Background: My wife and I, together, have been State Farm customers since 1985. That’s 36 years. My wife had been a State Farm customer going back to her college years when she needed car and apartment insurance. When we married we just combined everything under State Farm because it was the better deal at the time.

Through those decades I’ve gotten four tickets, the last one back in 2009 (and which I documented here: https://flic.kr/p/6tu5Ek ). With the purchase of our latest vehicle, a 2020 Acura MDX, I wanted to really baby the vehicle, driving as carefully and infrequently as possible. After a little over six months driving, that seems to have worked out fine as far as Acura is concerned, because we only have 4,800 miles on it, and when I took it in last Friday for its six month checkup, everything on that vehicle was still green, meaning very good to excellent. After having turned all my other vehicles into daily drivers, I wanted to really take care of the MDX. Which is why I thought it was such a good idea to sign up to Drive Safe & Save.

And for a while, it was. I was getting scores on the app all the way up to 100%. If I got dinged it was usually for speeding, such as traveling 40mph in the short road segment within Universal Studio before turning onto I-4, because Universal had marked it as 30mph. Most of the time I didn’t cross over.

But then a funny thing happened to the numbers starting in February. I started getting dinged for actions I’d never seen before, specifically turning and accelerating from a stop at traffic lights or going down the on ramp onto the expressways. Turns on roads within my neighborhood suddenly turned into these “dangerous” encounters, where if you were to interpret the raw presentation in the app indicated I was some wild and reckless driver. Except I hadn’t changed, but something else within the app or the app’s backend processing. I don’t know where, but the change was noticeable, with my overally score starting to trend down. I don’t mind being called out on something truly egregious, like excessive speeding (which I wasn’t), but turns and moving away too quickly when the light turns green? Give me a break.

Here’s an example of the last trip I made with this app active, and the final trip that made me remove it.

Note I’ve been dinged with one “bad” turn and two “bad” accelerations. Let’s examine the turn first, because that one is outrageous.

The right turn from Conroy onto Turkey Lake looks insane. If you believe the app I made a hard right turn into the oncoming traffic. In reality, the turn off of Conroy and onto Turkey Lake is a big intersection, and there’s a gentle curving turn lane which is shown on the map, and that’s what I always take (along with everybody else). Instead the trace shows a snap of my first traveling east, then immediately south. And in the wrong lane into heavy oncoming traffic. If I’d done that I wouldn’t be here right now writing this blog entry, I can assure you.

The other detail of this is just as bad.

Those little rockets indicate I was “rocketing away” from my stop. I don’t know how a regular acceleration from a full stop is supposed to be conducted, but here in Florida you pay attention to when you stop, and then move away reasonably quickly depending on how soon the driver in front of you moves, or if you’re first, how quickly you move. You linger at all and you get honked at almost immediately after the light turns green. This section next to the Mall at Millenia is full of stop lights. And lots of traffic. I have to move through this to get to Costco. And back again on the way home. And the reason you don’t see the trip back home is because there were zero events to show.

What This All Means

Words can’t begin to describe what a relief it was to ditch all of that, and how much I immediately began to enjoy driving again. Products like this just aren’t worth it.

On a small private airfield in central Florida sits an old prop-driven aircraft, a Convair CV 240 passenger airliner. When I say old, it was first built in 1947 and ended manufacturing the year right after I was born. So yeah, that’s old. I came across this airplane in 2012 under interesting circumstances. As fate would have it the owners who were trying to restore it were at the same restaurant I was at and we just happened to cross paths. One thing led to another and I was invited to go out to observe the aircraft as well as go through their small aviation museum they were putting together. I took my photos and then everything seemed to slip into the background. Later that year I had my left knee replaced, and then early the following year I was hit with my layoff and the long string of events that followed.

I drove back out Saturday into the same general area to go to what used to be a local business that sold planters and other items, such as plant dollies that went under the larger planters. The place was out of business and completely empty. My wife and I recognized that the airstrip with the Convair was just a little ways down the road so I drove us there and went to see if the airplane was still sitting there. It was. I got out with my Pen F and 1.2/17mm and collected a few more photos of the plane. Unlike the first time, there was no-one around and he plane was completely buttoned up.

Of all the parts of the 240 the most intriguing to me are the radial piston engines. These engines were developed during WWII and reached their heigh day right towards the end of the war, right when the very first jet engines were introduced. They were big and powerful and did incredible yeoman duty in both the military and civilian air sectors. There’s a part of me that wishes I had the time and money to pull one out, refurbish it back to working order, and then just crank it up and watch it work.

And if you’re wondering how many passengers this aircraft could carry, it was 40 passengers, all in one class. Would you look at those big, wide, comfortable seats? The only way you’ll get anything like that today is in first class. 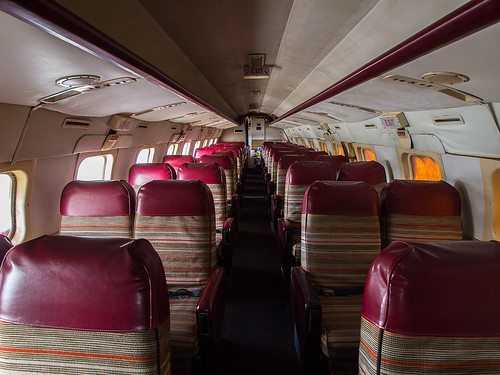 This used to be a working machine, carrying its passengers in relative safety and comfort a half century ago. There are very few left flying, run by collectors. Those that aren’t are sitting like this one, bleaching slowly in the sun.