New Years Eve was another traumatic event for all my little guys. As usual the neighbors set off their purchased fireworks, starting almost as soon as it got dark, and continued past midnight. I have a lot of little visitors snuggling in next to me while all the booms echoed through the neighborhood. When the festivities ended they slowly moved off to their regular sleeping spots for the rest of the evening.

The morning and the day were spent with everyone in the household napping and resting in general. They were all happy for the quiet of the day as well as the very pleasant sunny day. It hit 80°F today, not bad for the first of January. Everyone was outside of the house and around our screen-enclosed lanai (patio). I have discovered that the cats in particular are quite content to stay within the enclosed area, as long as they can go out and watch what’s happening on the outside of the screen. And that’s fine by me, as it keeps the cats from roaming around the neighborhood and considerably reduces their chances to pick up parasites such as heartworm.

Finally one from the garden. The hibiscuses have been blooming again, along with my azaleas and some other flowing plants. That means getting out in the garden pronto to get things weeded and replanted. 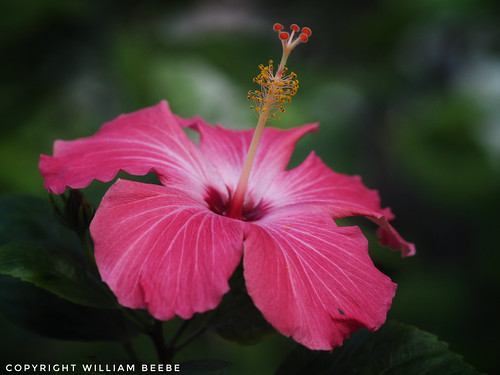 Everything taken with the 75mm on the Pen F.

Today is International Pi Day because it’s 3/14, or 3.14. Whatever. The household creatures say ‘big deal’ since they can’t have any pie. Or pi. Again, whatever.

Ruby is her usual quiet, contemplative self. She cares not for pi unless it it means she gets 3, or possibly 4, treats. She will have none of this fractional business, especially just a fraction of a treat.

I bring up that these photos were taken with my Panasonic GH4 and the Lumix 30mm macro. The GH4 is a mere 16mp camera, that when first released in 2014 was considered the bee’s knees. I’ve never used it for video, having fallen for the still imagery I can create with this hybrid camera. I purchased this copy four years ago, three years after its release, and some nine months after the release of the GH5 in March 2017. Panasonic still had a lot of copies in inventory, so Panasonic had a Christmas sale and marked the GH4 down over half, and I bit. I’ve never regretted that decision.