A very small flower out of the garden, and a test of taking photos directly from my camera and into WordPress without any of the post-processing workflow I’ve been dealing with for over a decade. The photo was taken with an Olympus OM-D E-M1.2 with a Panasonic Lumix G Macro 1:2.8/30mm.

I have been wanting to drastically simplify my photography, working on my camera technique to compose and expose properly in-camera, then to move the resultant JPEG right from the camera and into the post, such as this one. This is a “work-flow” that many pros perform, especially at fast-moving news events such as the Olympics. Pros don’t have time to post process, they need to move photos out of their cameras as quickly as possible to the news services that have hired them to be at those events. While I certainly don’t need the speed, the simplicity certainly appeals to me.

Once again, I wrote this post using the WordPress editor on the Lenovo Flex 5 Chromebook. The photos were transferred from the SDXC card to the Chromebook using an Xcellon three port USB-C adapter with SDXC reader, model USBCR-4311-A. 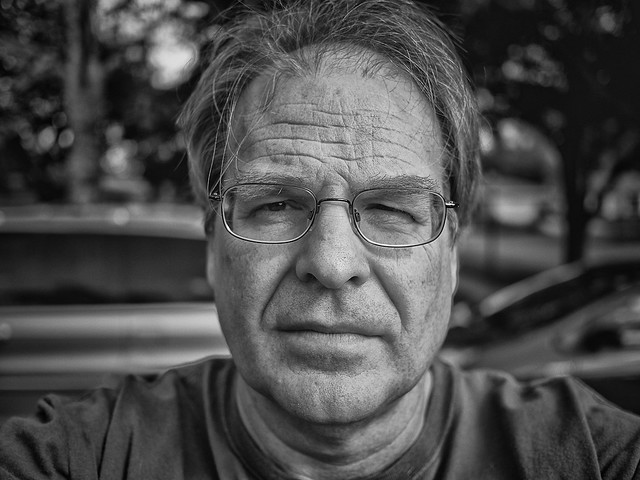 Originally titled “First Light” on Flickr, this was a self portrait I took with my brand new at the time Lumix 1.7/20mm in 2011. It was a combination birthday and Christmas gift, as my birthday is in December, so getting me a gift has always been complicated. The 20mm was lauded everywhere for its pancake size and overall image quality. It was a perfect fit on the front of my E-P2.

Now before you ask how I did it, keep in mind that the E-P2 had a rear screen that would not move out at all. To get some idea of framing, I looked for my reflection in the front element of the lens, and then took a number of shots just to be sure.

I like this photo because of the hint of sharpness right at the glasses frames. Additionally, there’s sharpness around the eye brows and the bridge of my nose, lips, and the front of my face in general. The in-focus elements are in that plane, with everything else falling out of focus, especially everything behind me. And just to make it nice to my eyes, the inside of the glasses frames at the bottom have a nice white reflection, giving an interesting contrast to the rest of the picture elements.

I went for the grunge look with Nik Silver Efex Pro 2, a plugin for Lightroom. The Silver Efex filter is Wet Rocks. The problem with doing this kind of extreme modification is the blocking up of the background and the sharp transitions between light and dark areas. The original color image shows a much lighter background with far more subtle transitions in the out-of-focus regions. And because everything is so dark, my portrait is almost lost in the mush. But the three-dimensional separation is still there, if somewhat diminished.

Overall the effect makes me look like I’ve been working in a coal mine. It seemed to fit my mood at the time, which was one of chronic pain in my left knee. I’d taken a business trip up to Michigan in November to visit General Dynamics Land Systems and climb around in the turret of an Abrams tank. Nothing happened while there, but as soon as I got home I wound up in the ORMC emergency room unable to walk. At this point in December I was in physical therapy, constant pain, and the start of a slide into depression it took a while for me to acknowledge. So, no, I wasn’t in a particularly happy mood.

So how do I look ten years later? I’ve lost even more hair, the jowls are more pronounced, but my mood is much better, in part because I had my left knee partially replaced in 2012 and I’ve since retired. Plus all the additional age-related damage that human beings are heir to.

I no longer have the 20mm, having given it to my youngest daughter along with my E-PL2 Olympus. It was replaced by the Olympus 1.8/17mm, the metal bodied 17mm, not to be confused with the 2.8/17mm pancake, which I also tend to miss from time to time. Such is life.