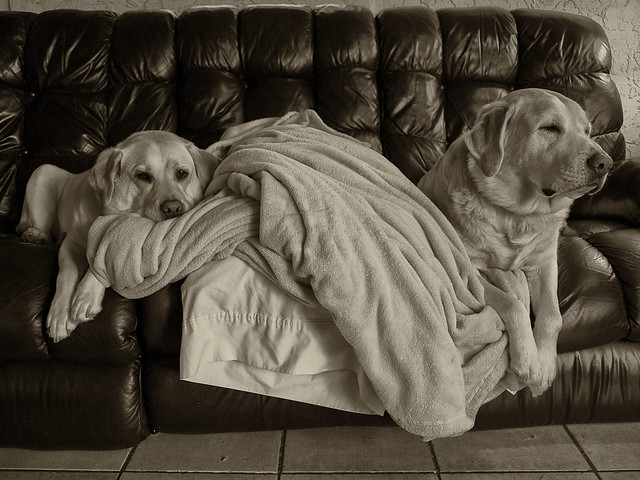 I’m dipping back into my past Flickr photos and pulling one out to talk about it. This is the first of I don’t know how many, but there may be a few. I’m doing this because I got pulled into looking at my past work, and discovering that I still liked what I had produced 10 years ago.

This photo was taken December 2011 of a three-year-old Ruby on the left and her companion, eleven-year-old Max on the right. Max left us in 2015, after a long and robust fifteen years with us (he was rescued by us in January 2000, and he was already six months old at the time). The story behind this photo is that I had a very rough night and had crashed out on the old La-Z-Boy sofa in the TV room so I wouldn’t bother my wife. The Labs, of course, saw an opportunity to spend that night with one of their favorite persons, so they wound up sleeping right up there with me. When I got up in the morning, they stayed up on the sofa, picking spots comfortable to them. When I came back in there they both sat. Fortunately I had a camera close to hand to capture this moment.

I just like the composition. Both of them are exuding personality, especially Max. It reminds me how much I’ve missed him these past six years. Ruby is still with us, and she’s still my sweatie.

The camera used is the Olympus E-P2, with its ‘mere’ 12MP sensor, along with the m.Zuiko 2.8/17mm. This was during my ‘dark black-and-white’ period, where I was post-processing the hell out of everything because I thought it would look more artistic that way. The only saving grace is that I used a sepia tone which helped to bring up the highlights a bit and added a bit of texture to their coats.

Ruby quickly came to realize that Max was gone and wasn’t coming back. It wasn’t like other times when Max had to spend a few days at the vets. This time Ruby knew, like we already knew, that Max was gone for good. Whether she picked it up from us, or figured it out on her own, or some combination thereof, Ruby did know. She fell into an almost human-like depressed state, choosing to curl up in corners of the furniture or spots around the house. From time to time she’d hear other dogs barking and would lift her head expectantly. But she’d quickly figure out it wasn’t Max and put her head back down, her eyes going down into a half-lidded, almost introspective, state. As if she were remembering times past.

I can’t help but feel her loss in this photo.