Lulu is dying from feline lymphoma. She was diagnosed back in March, when she started to throw up. A biopsy at our local vet narrowed it down. This isn’t the first cat to die from some form of cancer. Lucy died from lymphoma back in 2015. What I experienced with Lucy has helped prepare me for what’s happening with Lulu, and to reach a level of acceptance far faster than I ever did with Lucy.

Lulu, like Lucy, was a rescued feral cat. In Lulu’s case she was taken in by my daughter when Lulu was between six months and a year old back in 2006. She came to live with us Thanksgiving 2007. She’s had a good long run for a feral cat. Ferals, unlike true house cats, don’t live quite as long. With Lulu at least we got to know her for a good ten years.

Instead of keeping Lulu at the vets for long periods for chemo therapy, I’m feeding Lulu a ground-up half-tablet of Prednisone, 10mg, every morning mixed in with her Fancy Feast and keeping her with us at home. Prednisone is a kind of chemo-therapy for cats that helps them to cope, and even induces a bit of remission. Most mornings, and most days, she eats all her food, and for a time after we got her going on the steroid she had a very healthy and normal appetite. But recently she’s gone back to throwing up about once a week, and then not wanting to eat for a day. She still moves around the house and spends her time at her various favorite spots, such as the sun-warmed box window that Lucy used to love to lie in as well. The steroid has at least given us an extra six months with her.

Rather than being caught off-guard the way I was with Lucy’s cancer, this time I’m prepared, so I keep adding more specific moments while Lulu is still with us. That’s the best way to keep a pet. Spend as much time as possible engaged with them so that there are no regrets when they leave. It’s a good formula not just for cats, but for all living things. 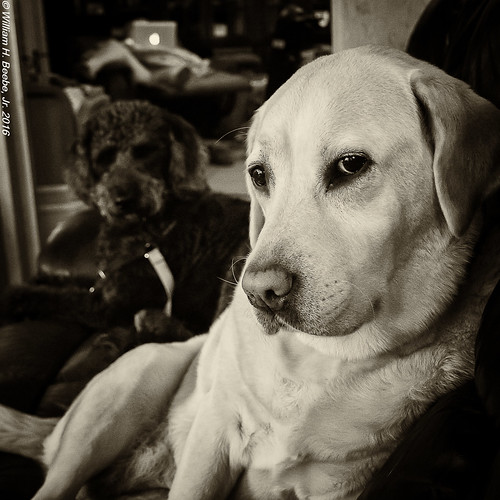 It’s been a while since I lead off with any of the household animals, especially the Labs. I can still call out plural Labs because Annie is a Labradoodle mix. Pride of place in this photo belongs to Ruby, who has perfected the side-long look like no other Lab that’s ever lived with us. She loves to hop up on the sofa next to me, sidle over close, and then give me that “come hither” look, which for a Lab means “walk hither.” Annie, back in the shadows, is watching, picking up tips. Her schtick are her flying leaps, which I’m assuming come from the Poodle side of the Doodle mix. 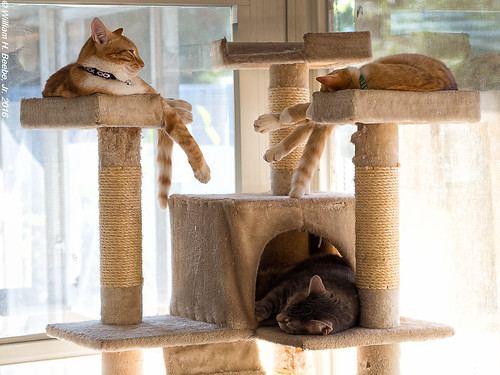 The Mackerel Tabbies seem to be getting along pretty well these days, at least in the big cat tree. I’ve not checked in about a month, but back in April, at six months, the Gingersnaps were weighed at nine pounds each. Lulu, resting at the bottom, is a little over fourteen. Everybody realizes Lulu is our special needs cat, and they give her reasonable wide berth. But when it comes time to nap, everybody gets along in the cat tree. As long as nobody but Lulu goes in the cat condo.

I’m photographing more, but posting less. The breaks are good as long as the don’t become indefinite. Top photo was taken with the Olympus E-M10 and the 14-42 EZ pancake zoom, bottom with the E-M10 and 45mm Zuiko. I also took the luxury of post processing with Lightroom 6.