I’m still dealing with Ellipses’ final exit, but as I was sitting and talking with my wife, she noticed the beautiful sunset just outside our back door. In a metaphorical sense it is a fitting reminder that ends are not all dark, but like a beautiful sunset, herald the end of one day and the start of the next. It seems fitting that this is a fine way to think of Ellipse leaving us. She has left us a rich history of mutual memories, and plenty of photos I’ve taken over the years of her and all the other creatures who’ve lived with us. Those that are still with us are moving around the house as they are wont to do. The girls still come up to ask for rubs and to remind me when it’s time to be fed or to go out for their walks. The boys come up for their rubs and to remind me when they need to be fed.

Ruby just turned 10, and with a lifespan in our house of around 15 years, that means five more years of spending my life with Ruby. When it’s her time to leave I’ll deal with it accordingly. Now’s the time to make sure I gather enough photos and memories of her while she’s still with us, still hale and hearty. Annie, her constant companion, turned 3 this past St. Valentine’s Day. If the Lab lifespan is any indication she’s here for quite a long time. And the boys will turn three in early October. Again, if Ellipses’ life span is any indication, they’ll be around for quite a long time as well.

It has taken me at least a decade to be taught by Ellipse, Lulu, and Lucy how to live with cats. They’ve all taught me well, and the Gingersnaps and I benefit from the training. I look forward to many more good times with the four footers.

Lulu knew in her own way she was ready to go. She hadn’t eaten since last Thursday, and before that she was beginning to throw up again. The “miracle” of the steroid had run its course, and the cancer in her colon had in all likelihood spread to her stomach. She spent her days in the warmest parts of the house, under the sun coming into certain windows, in all probability because the heat from the sun helped ease her pain. We’d already made the decision that today would be the day to put her to sleep. Today she didn’t put up any fight when the vet tech came over to pick her up. She was ready.

In spite of her pain, she was still holding her head up and was aware of her surroundings. She still had her dignity. When she went it was very peaceful and without any pain for her.

In spite of how much my wife and I will miss her, we’re also aware of what a problem cat Lulu was. She intimidated all the other animals in the house, even the dogs at times, but especially the other cats. She’d been found wondering the streets as a feral young cat (the vets estimated between 6 mos and a year of age) by a friend of my oldest daughter. As a consequence Lulu came into the household as a fighter and never really gave that up. When we needed to take her in to the vets she fought like a wildcat, screaming and fighting until we could somehow wrangle her into the biggest cat carrier we ever owned for any of our cats. We loved Lulu like we have always loved our animals, but the other animals kept their distance. Where-ever Lulu went, or whatever Lulu claimed as her own the others kept away.

And yet, if we let her come to us she could be as sweet a cat as any of the others. I could rub her head and ears and immediately get purrs coming from her. But it was always, always on her terms. And sometimes I’d make a move that spooked her, and she’d turn, growl, and run off. I spent nearly all the years she lived with us trying to figure Lulu out, and perhaps, just perhaps, in the last year, I might have finally broken through. For in the last year Lulu was a lot more laid back, and a lot less skittish, than she’d ever been before. If only I’d figured Lulu out sooner, or if only she’d managed to live a few years longer she might have become the kind of cat we all want, and I have, in the calico and the two gingers. No matter what we loved Lulu unconditionally. I believe Lulu came to realize that.

Lulu’s was an outsized personality that won’t be quickly forgotten. The gingers will eventually forget and re-claim their bed and place in the back bedroom window which she claimed towards the end, which is as it should be. And then the cycle will roll on and we’ll enjoy all the other creatures in this household, dealing with the losses of all the others when their time eventually comes.

If there’s anything positive about these events it’s that Lulu left us in peace. Furthermore, the other animals are a lot more laid back than they’ve been for some time. The gingers in particular are moving around the house without any fear. It fills me with considerable warmth to see them, especially Beau, the shyer of the two gingers. And Ellipses, the calico, spent a good portion of the day either roaming the house or else sitting in my wife’s lap. It’s as it was when Ellipses and Lulu first came to this house Thanksgiving 2007. Calmer times have returned.

I’ve included a few of my more favorite photos of Lulu. The one leading off this post was taken nearly a year ago. I finally got the green in her eyes to show through. 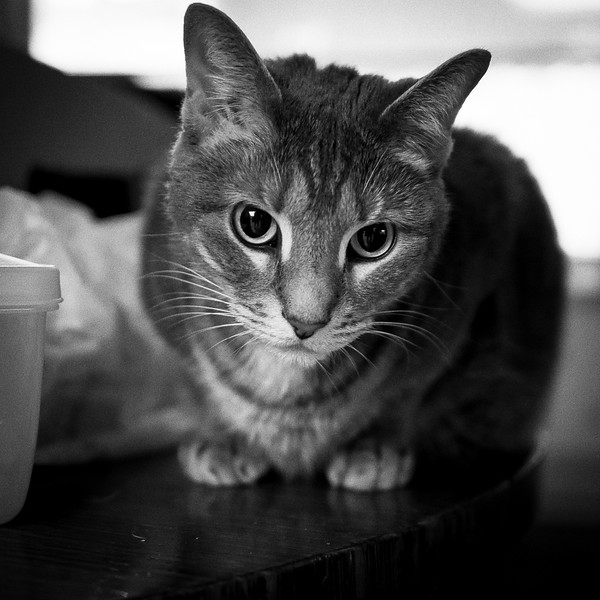 This photo was taken in 2013 and shows those big dark eyes that Lulu had when the irises really opened up. Lulu was up on the kitchen table waiting for cat treats to be dispensed.

This photo was actually taken Christmas 2014, but published the following January. This is my favorite Christmas photo of her, and of all the cats. She was asleep in her chair in front of the lit Christmas tree. Lulu loved the Christmas tree and every year would just sit or lie in front of it for hours, watching the twinkling lights and moving decorations. It seemed to mesmerize her. In this photo she reminds me of a little child dreaming of “visions of sugar plums.”

And this is our closing photo. In spite of her weakened condition the vet and I selected to give her a regular dose of anesthetic gas, as if she were going to be operated on. We waited until she fell to sleep, then took her out and administered the euthanasia drugs. Lulu was a beautiful example of a gray mackerel tabby. At the very end she’d lost weight and her coat had gotten a bit ragged. I wanted this one memory of our final moments together.

My wife and I have had many animals since we started dating back in 1982. We had a Best Lab (Rhett) at our wedding. I got my very first dog, a black Lab (Katy) from the same breeder as Rhett. Over the years we’ve had Spook (another black lab), Babe (a chocolate Lab rescue) and Max (a yellow Lab rescue, who we put to sleep last year). I’ve participated in all our animal’s exits. I’ve always believed that’s part of the responsibilities of being an owner. And I’ll continue to do this until I can no longer own a pet, which I fervently hope that day never comes. Pet ownership fulfills a vital need in my life, just like marriage and my children. In this frightful world they bring me peace and the belief in something good and wonderful outside of myself. Even Lulu did that.