I traveled to Atlanta this past weekend to visit my 87-year-old parents and to spend quality time with them. As a newly-minted retiree I now have far more time to make such trips and for longer periods of time. Which isn’t to say I’ve not been up to visit before now, but with the restrictions of work and other issues in Florida, it made scheduling to visit more complicated and the trips much less frequent than they probably should have been.

And now I’m in the midst of watching my father fall to dementia. My uncle, his younger brother, died from Alzheimers in the early 2010s. My uncle’s fall was swift and brutal, less than two years from diagnosis until his death. Now my father appears to be in its grips, although his progression is slower. There are periods in which it seems to be abated, such as this visit. Or so it seems to an outsider looking in. My mom is his caregiver and has the unenviable task of watching over him constantly as well as watching him…

My mom isn’t alone in this. My brothers and sister are living in Atlanta, and all of them lend a hand, especially my older brother and my sister. And my sister is very close to my mom (just like my daughters are with my wife), so there’s that. My mom misses me very much, as does my dad. And when I travel up to visit I do odd jobs around the house for her, and she sits and talks with me while I work. Before I left I set up out iPhones so that my mom can “see” me with the Find My app, and I can keep an eye on her and my sister back up in Atlanta. My mother found solace in watching me travel down Marta from Doraville back to the airport, and then saw I’d made it back home to Orlando. I text and email and talk to her constantly, but Find My seems to give her that little bit of extra comfort that she can see and reach out to a specific location. Where I’m at isn’t abstract anymore.

Over the years while he’s been in retirement I’ve made the trip up to visit my parents. I have a photo from January 2012 that is a reminder of what he once was.

This photo shows him smiling and happy, especially to see me. He loved me very much (he loved us all equally) and he was always glad to see me when I came home. We were upstairs in his home office at the time and I was talking to him about the Olympus E-P2 with the 45mm f/1.8 lens, and as I was demonstrating it I just lifted the camera up and grabbed this quick photo. Nothing planned. Later we went into Conyers and walked around taking photos like a couple of tourists. 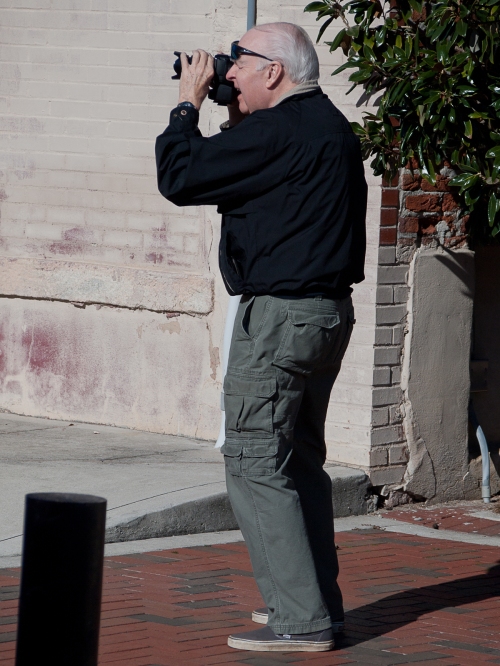 That’s my father with his Olympus E-300 and kit zoom. My father was always the avid photographer, going back to when I was a little kid. He got me hooked on photography, helping me get my very first 35mm camera, a Yashica Electro 35 rangefinder. Later in the 1970s he used nothing but Olympus, starting with one of the first OM-1 film cameras to be sold in Atlanta. Over time he purchased every version of the OM series, from 1 to 4, along with a number of lenses and the Olympus flash kit. He was pretty good photographing orchids, which he raised in his greenhouse out back. Back around 2015 he gave me one of his last OM purchases, an OM-4T. I have it in on of my bookcases, kept carefully clean. I pretty sure it still works, even as old as it is. But I’m afraid to take it out for fear I might damage it, or worse, loose it.

That greenhouse is still out back, but it’s a shadow of its former self. My older brother still tries to keep it up, but where it once was crammed full of beautiful orchids, it now is pretty empty, and most of the pots that once held many an orchid are empty and piled up in back of the greenhouse. My dad doesn’t go into it any more, and hasn’t for some number of years. The path from the house to the greenhouse entrance, while quite short, is steep and difficult for him to navigate without fear of falling.

This year is going to be far different than any other up to this point in time. I have no idea where the journey will end, and refuse to think on it too much. But the keywords for 2020 living are going to be focus, calm, and supportive. Most importantly, providing as much strength as possible for the family, especially my mom and dad. Especially my mom.

“People don’t like love, they like that flittery flirty feeling. They don’t love love – love is sacrificial, love is ferocious, it’s not emotive. Our culture doesn’t love love, it loves the idea of love. It wants the emotion without paying anything for it.”
― Matt Chandler