As I’ve grown older my diet has changed away from what I used to eat and drink in my youth. One of those changes is my ability to handle sodas, and then diet sodas. I gave up sugared sodas thirty or so years ago in my late thirties. There wasn’t much in the way of diet sodas, but fortunately for me I was able to switch over to Diet Coke, which had been released back in 1982. I didn’t care for the taste all that much, but I didn’t have much choice as I was rapidly gaining weight; my doctor at the time told me to drop the regular Coke habit or basically die young. So with that rather blunt choice I chose to drink diet Coke.

Over the following decades I switched around to various diet sodas as they became available, keeping diet Coke as my fallback soda. The only diet soda I couldn’t stand was diet Pepsi. I just couldn’t drink it. If I went to a restaurant that only served diet Pepsi then I switch to ice water.

Over the last few years I’ve been dropping diet soda consumption to zero. I discovered I was reaching a point of intolerance; I couldn’t handle the taste nor the after effects of consuming it. So I would stop cold turkey, usually for a month or so, then “fall off the wagon” and start drinking it again. After another period of abstinence I picked up a bunch of twelve ounce diet Coke packs (eight bottles to a pack) because a local Publix supermarket had a buy two, get two free sale. So I stocked up and started binging diet Cokes again, usually three or four at a time.

Over the past week I haven’t felt particularly well. I felt tired, wound up napping a lot during the day, and in general felt like I had low energy. I also had a ‘vague’ headache; nothing painful, but annoying. Then I ran down the diet Cokes and stopped drinking any of them three days ago. It was almost magical; my energy slowly returned and the vague headache went away. Right now I’m feeling pretty good.

I think my body is trying to tell me something about consuming diet Cokes, as in, don’t. Since switching back to ice water (you know, ice out of the freezer mixed with water in a glass) a number of little things are better; my mouth doesn’t have this permanent aftertaste, my stomach isn’t bloated, and other minor complaints seem to have just gone. I can comfortably live with my body again.

I’m completely done with the witches brews of diet sodas, especially diet Coke. Ice water, and maybe brewed teas (I used to make pitchers of brewed unsugared tea), are the drinks for me, especially water.

And so here we are (my wife and I), sitting mostly at home, only going out for absolute necessities such as food and drugs. The drugs are coming from my local CVS, and I can do the drive-through for that, thus staying away from the contaminated herds of stupid denying people. The food and other basic supplies I’m getting almost exclusively from a local Costco. Here’s what that was like when I went out this past Tuesday.

Firstly, all the grocery stores have suffered from panic buying. Toilet paper was the biggest visible buyout, but other items were being scarfed up and hoarded for no good reason. These included bottled water packs, eggs, and bread. I’ve read that pastas were also being scarfed up, and I’m sure there are even more items. 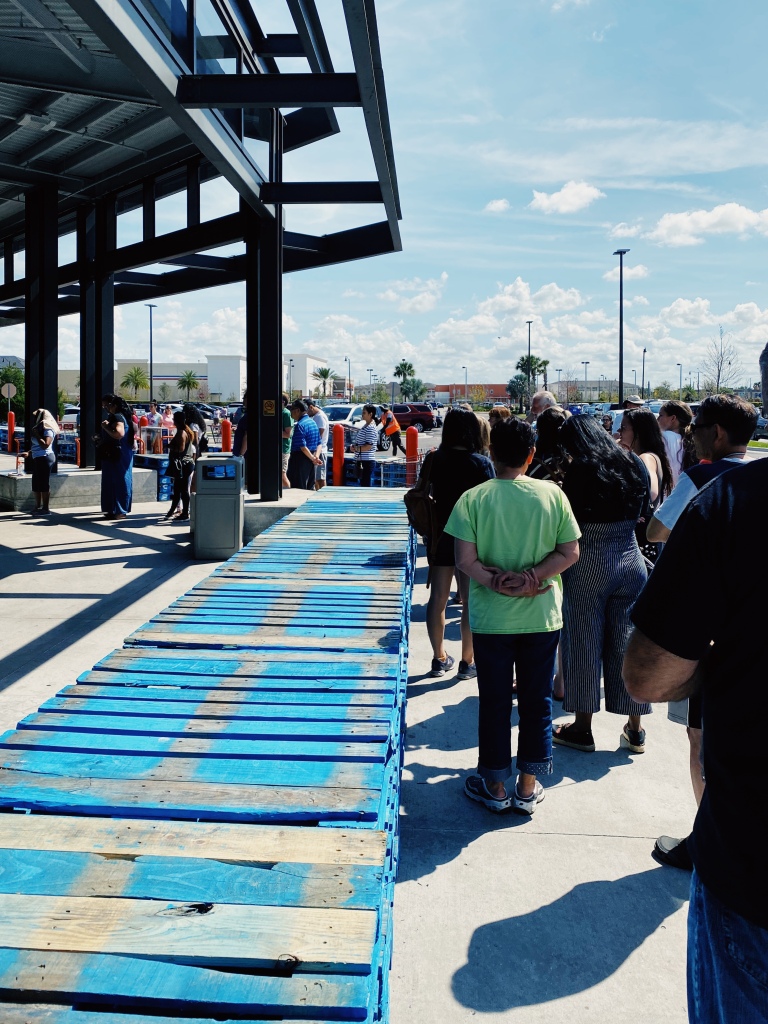 When I got to the Costco closest to where we live, I discovered that the Costco staff had closed off the front of the store with stacks of blue flats at least waist high (at least to me), and we were directed to start a queue off the side, single file. The the staff let us in a few at a time. I was able to get in after a five minute wait outside. Note the sign at the entrance about social distancing.

I got in and picked up the few items we needed. As I moved through the store I kept hearing staff saying “one egg, one bread, one water.” By one egg they meant flats that contain two dozen eggs. Two dozen is all the two of us can consume even in a single week. It usually takes about a week-and-a-half before I have to go back and get more eggs. A single bread purchase from there lasts a week, and as for water, well, tap water is actually pretty good around here. Once I got to the checkout, the Costco staff had set up the checkout lanes so that every other one was closed, helping to maintain social distancing. 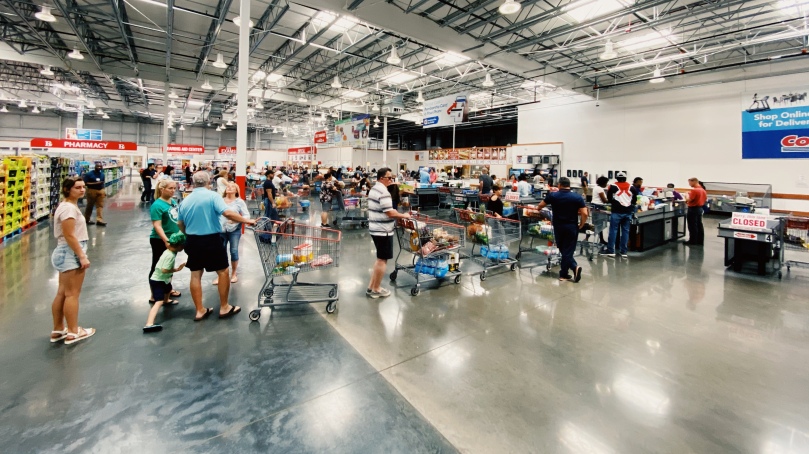 And to give you the obligatory empty toilet paper isle, this is from the Publix closest to where we live. This was taken right before I went to Costco. All the other Publix isles were still fairly full, at least at a glance. I didn’t spend any time in that store because it was too crowded to suite me; I was in and out in under two minutes and kept my “social distance” the entire time. 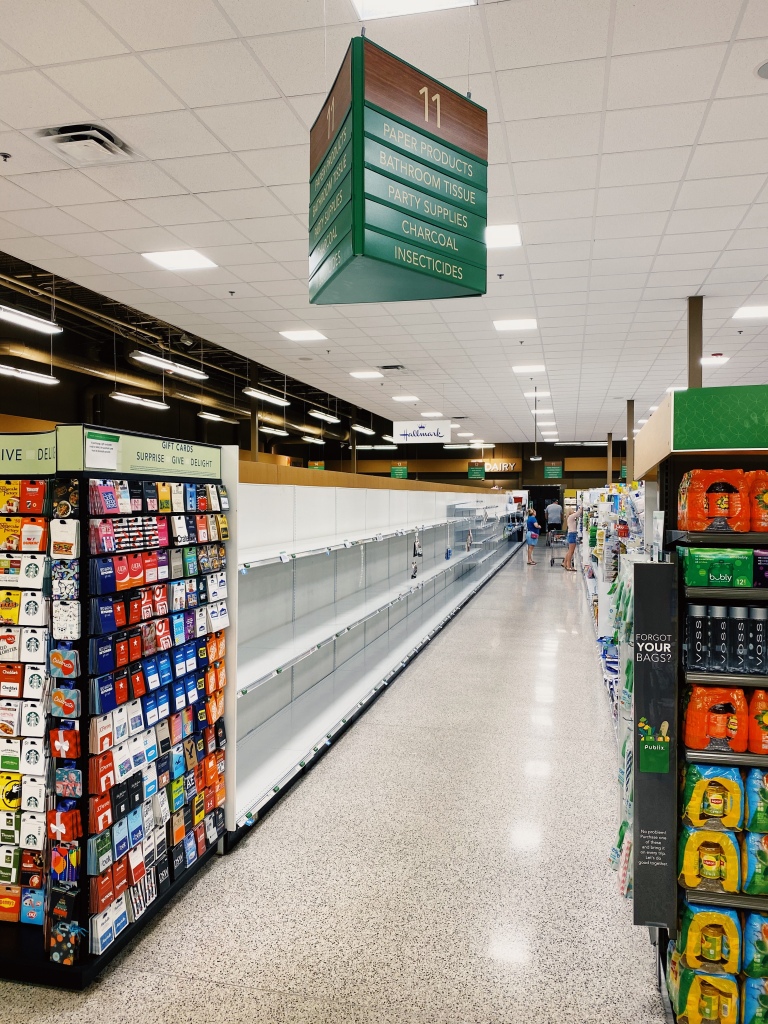 I don’t know a “good” way to end this except with this latest COVID-19 map update. The numbers are steadily climbing, especially for the US. We could have avoided the worst of this if we’d acted eight weeks before we finally did. Now, we have to get through this as best we can.