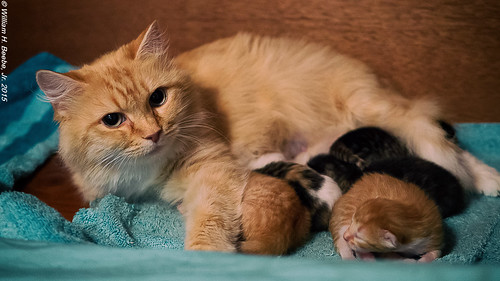 Life follows an eternal circle; birth, life, death, and birth again. Today was about the birth of five kittens less than a week ago up in Gainesville. The mother is named Sunshine, and she’s a temporary rescue. Why temporary? The owner, a friend of my daughters, had to leave Orlando due to a family emergency. My oldest daughter volunteered to keep Sunshine for the next nine months until the original owner can come back to Florida and retrieve her. In the mean time Sunshine was expecting and gave birth to five kittens; two gingers and three calicoes. 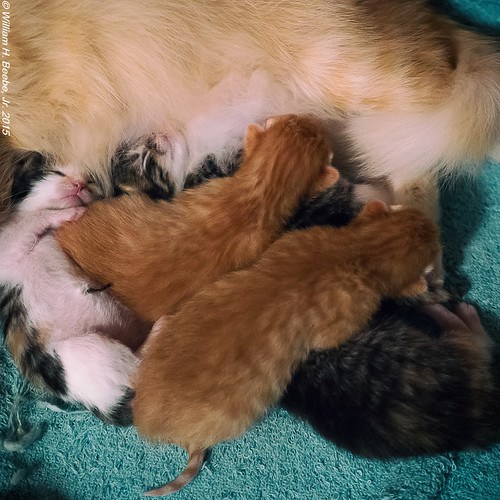 It’s been decades since I was around kittens this young. I had to be careful in the room with Sunshine. She didn’t know me and was very apprehensive to have this big stranger around her kits. I kept it low and slow, and kept my distance from her and her kittens as much as possible while taking photos. But I did manage to get away with a few, such as the wriggling pile of kittens trying to find mom for food. Or at least that’s what it looked like from my height. 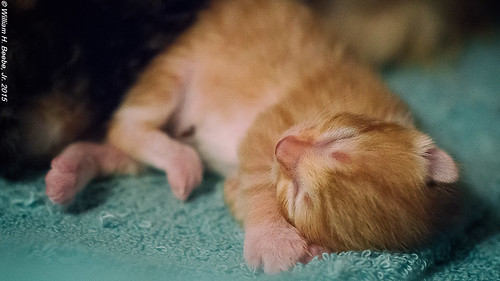 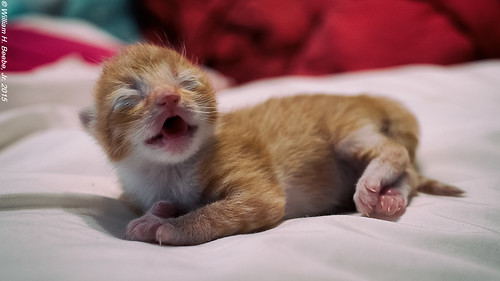 We tried to take photos of one of the gingers as well as one of the calicoes, but the calico wouldn’t stay still long enough to have his/her photo taken. In any case I had my daughter gently handle them as Sunshine the mother was used to her. Sunshine was already showing signs of agitation at my presence, and the last thing I wanted was to put my scent on her kittens.

I might drive back up next weekend to see how much they change in a week. If I can’t get back up there before next weekend, then I won’t be able to see them until the first of November.

I don’t know if I’ll adopt one of the kittens to replace Lucy. I’m not at that point yet, and it’s going to be a good two months before they’re old enough to be adopted, so I can put that decision off for a while. I’m heading into the end of the year with four-plus weeks of travel split across two trips. I have enough to think about as it is.

These photos were taken with the Olympus E-M10 and the Panasonic Leica 1.4/25mm set at f/2 and the Olympus OM 1.4/50mm closed down to f/2.8. It was very dark where mother and kittens were located. I juggled between apertures that would allow for reasonable depths of field and shutters fast enough, letting the ISO automatically compensate. As a consequence all of these photos are high to very high ISO. 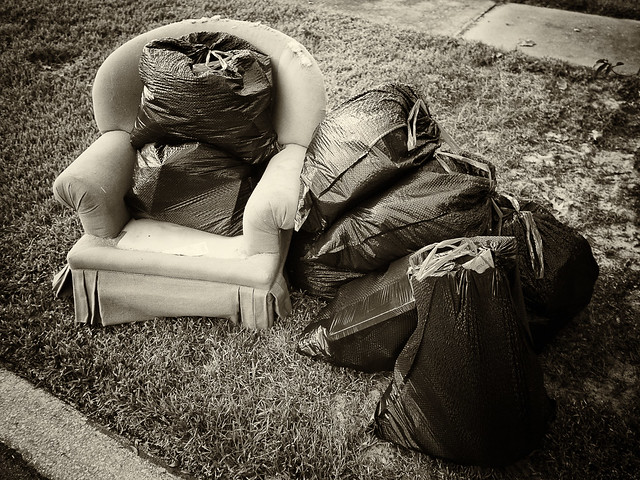 My wife and I have been cleaning out the house now at a rather rapid clip. We reached a point, after literally years and years of looking at an overcrowded house, to start cleaning everything out. This was last weekend’s efforts.

That stuffed chair was something we’d had for over 20 years, a piece from her mother (long since passed away) that had been re-covered more than once. It wound up sitting back in the rear room of our house. I have no idea what happened to the seat cushion, but the chair gradually filled full of stuff, some of it in the trash bags sitting next to the chair. Before we got cat trees the cats had turned the top into their personal scratching area. The rest of those bags are full of things that were so old we couldn’t use them and couldn’t give them away in good conscious.

What’s not in this photo are the five very large bags of clothing that went to the Salvation Army facility on West Colonial.

What’s also not shown are the cardboard boxes holding books that the girls read as middle schoolers. Those filled the back of my wife’s black Prius and were driven up today to my oldest daughter for her to disburse to the Friends of the Library up in Gainesville.

I wanted this photo to act as a point in time, and to act as a personal motivation to get the rest of the house cleaned up. Next year marks the 30th year we’ve been living in that house, and I want 2015 to be the Year of the Great House Renewal. We’re not hoarders, but we’ve got stuff that spans the full 30 years (and even earlier when we were dating, and then before that when we were just regular singles). And it’s time to let it all go. We need to fix the place up, either to retire to, or else to sell it and find another place to retire to. Whichever way it turns we need to get the place fixed up.

And, of course, the cats were effected by all the cleaning and moving of stuff around. The labs were all cool, but the cats were very curious and liked having new pathways open up in the back room. Ellipse (below) wanted to observe in a convenient hidden spot. Lulu didn’t care. She was in her fish sitting in the other stuffed chair (which we’ll keep for a while longer) as things were moved out of the house. 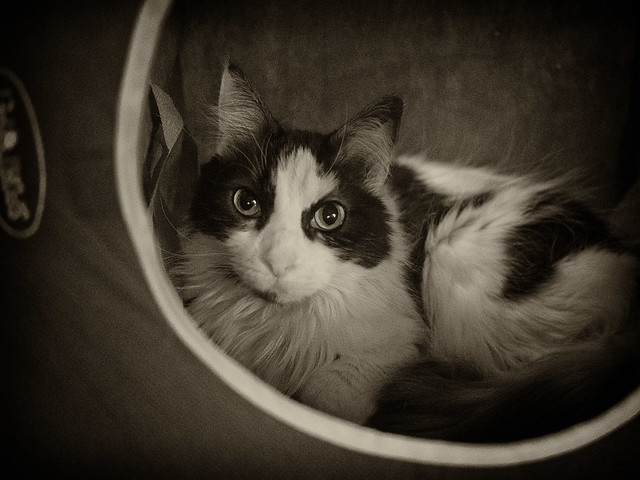 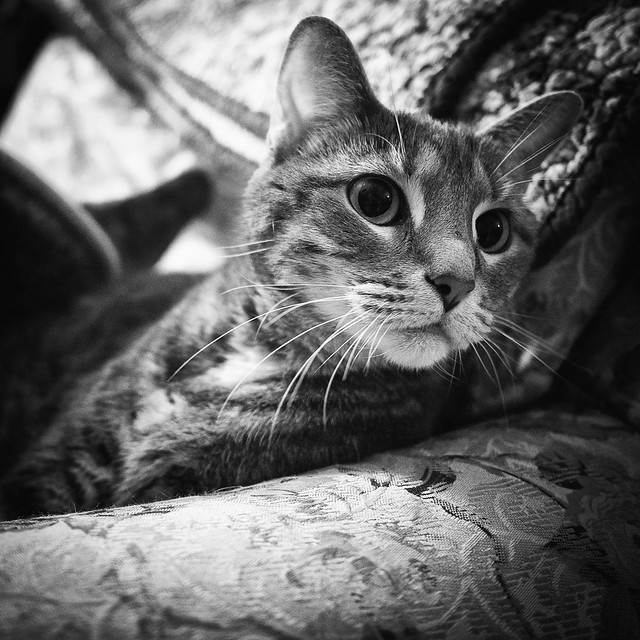 We’re on a solid roll now. We’ve broken through the barrier that’s basically kept everything in the house because the question was always coming up “what if the girls want this stuff?” We’re now aggressively asking the girls about all of this, and handling it accordingly. A lot of it needs to go to, either out as trash or out to folks who can use this stuff.

It feels good. The house is opening up, and so are we.