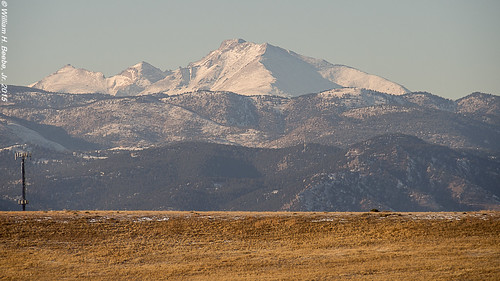 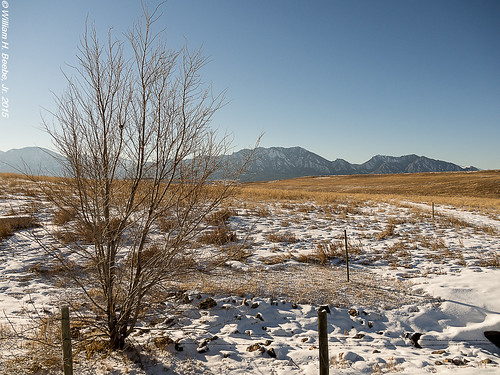 I spent a quiet Christmas in Denver with my youngest daughter. I’ll spend New Years Day with my oldest up in Gainesville. Such are the logistics of keeping track of adult children scattered across the country. These two photos were taken just east of Bolder, looking west towards the Rockies. It was cold (lows in the single digits) and it snowed Christmas day to give my wife one thing she wanted, a white Christmas.

The Sunday before we left my wife and I drove in the general direction of Estes Park, stopping around Bolder to do a little sight-seeing and for me to grab a few long distance photos of the Rockies. I had a new lens with me, the M.Zuiko 14-150mm Mark II. I had it mated with my E-M5. That lens, and the 17mm f/1.8 were the only pieces of camera gear I took with me besides spare batteries and a charger. I left everything else at home and depended on my iPhone 6s+ as my backup camera. The top photo was taken at 150mm, while the bottom was taken at 14mm. The one body, one zoom and one prime kit is the most practical I’ve ever taken with me on travel, and it’ll probably remain that way indefinitely.

One reason I wanted the long view of the Rockies is as documentation of what snows look like on the Rockies. With all he talk of climate change I wanted a small remembrance of what snow looked like on those peaks before it melts completely away. While it got cold while we were there both the cold and the snow were short lived. When we left the following Monday it was starting to warm up to temperatures above freezing towards the end of the week. Back here in Orlando the temperatures during the day have been in the low 80s. We do live in interesting times, don’t we? 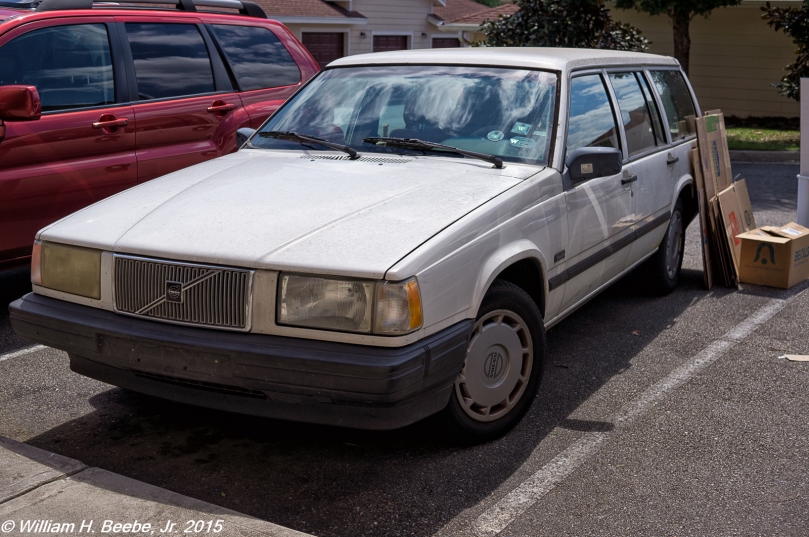 It was the second family Volvo. The first was a 1988 Volvo 240 wagon that was a replacement for a Nissan Van back in 1991. That Volvo was my wife’s and the perfect professor’s car, back when my wife was still an English professor at Valencia East.

The 940 would go on to take us on vacations around the country, including the infamous (within the family) camping vacation to Moonshine Creek North Carolina. While there, Max, still something of a very young dog, got loose from the camp. My youngest daughter went into hysterics, thinking that Max had gone off literally over the hills above the campsite. But I knew better. I walked down towards the creek that ran though the campsite looking for him. Sure enough, he’d gone splashing through the creek, then had stayed long enough to play with some of the kids, and taken off further into the camp towards people. And food. Sure enough I found him walking slowly towards me, with an embarrassed look on his face, smacking his lips, and with steak on his breath. To this day I have no idea if, or even where, he might have gotten into steak, but there were some comments later from others in the camp about how an older couple had somehow lost their lovely steak lunch which they’d left right next to their grill…

I knew where to find Max that day because I knew Labs and what motivated them.

The 940 served family yeoman duty right up to the point where I bought my Kia Sorrento in 2002. By that time the 940 was fully paid for, and still going strong. I tend to drive my cars until they fall apart from rust. The 940 was going to be my oldest daughter’s college car when she started as an undergraduate. The car was heavily neglected up in college, but was tough enough that when I got it back I managed to fix the really serious problems that had developed. Then my youngest wanted it for her college car, and so back out it went. And that’s where it stayed until her move to Denver.

The car was so old I gave it to Goodwill. Although it was still drivable, it had more value (financial and social) as a donation. She’d picked up a second used car, this time a 2014 Toyota Yaris fleet car with 36,000 miles on it. The 940 at that point was so old that whatever she did to it was irrelevant and costly; it was better to sink any money into a new vehicle.

When my second daughter first got the 940 she decided to put stickers and other decorations on it. For example, in 2009 when she came home, the back of the Volvo looked like this: 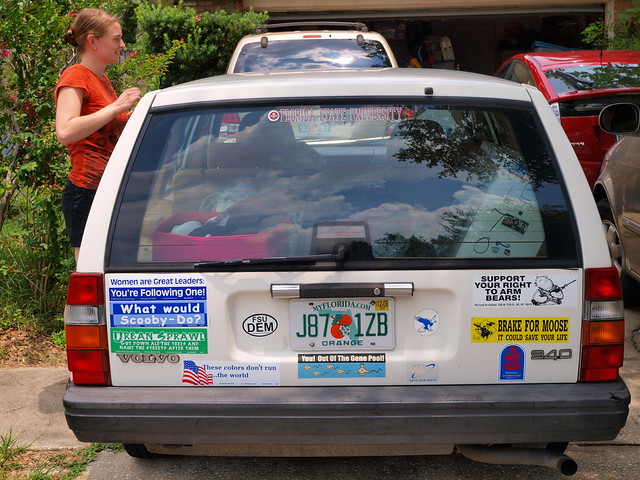 On moving day the same tailgate looked like this: 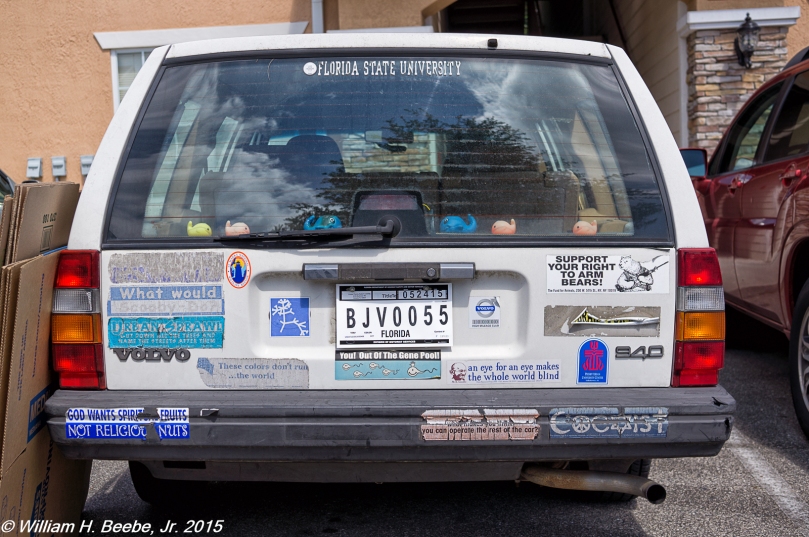 A lot of just faded off stickers, some added, some changed. A small story in and of itself of the changes my youngest has gone through over the last six years, and something of an allegory about how dreams and ideals, especially those we form in college, will fade due to contact with reality and time…

The car itself was finally, literally, coming apart. Windows were failing to stay closed, and the various seals were leaking around the exterior, making it problematic during Tallahassee’s heavy downpours. The final straw was the idea of trying to get it to Denver. It sure wasn’t drivable that far, and even if by some miracle it had made it, Denver and Colorado have car inspections, something Florida does not. There was no way in hell it would have passed. With all the money that would have needed to be spent, a new used car was needed to replace the Volvo. 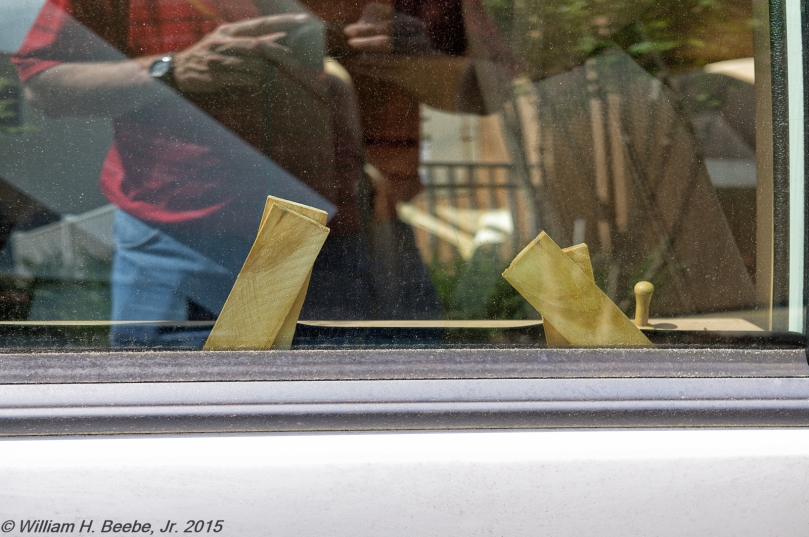 Of all the cars I’ve ever owned, I have to say I’ve gotten incredible value out of the Volvos, and the 940 specifically. The Toyotas are a close second, especially the Priuses we’ve owned since 2009. No matter how long we own the Toyotas, I don’t think I’ll ever own another car with that kind of shear ruggedness, especially in the face of indifference to service that the car suffered over the last ten years with both girls.

By the way, the car had far more than 209,813 miles on it. The trip odometer stopped working reliably at about that time some five years ago.

All this marks the end of an era. There are no more of us in Tallahassee, and no more reason to make the trek up there.