Fujifilm recently dropped the price of their flagship camera, the X-H1, for the second time, down to US $999. The X-H1 is the largest camera in Fuji’s X-series APS-C camera line. It’s fully weather sealed, has five axis in body image stabilization and what appears to be very good video recording features.

The X-H1 was introduced in early 2018 for the rather princely sum of US $1,900. It used the same sensor as the X-T2, but with some additional processing tweaks. It was seemingly being pitched as the ultimate X series ILC camera, physically a step above the X-T2/X-Pro2 cameras. And it should have been. In addition to even greater mechanical quality and robustness, the X-H1 has a larger, deeper grip and an LCD status panel on the top deck where the ISO compensation dial is on the X-T2. That last item annoyed the Fuji purists who wanted all the mechanical dials. The problem with the larger grip isn’t the size, it’s the fact that the X-H1 still uses the same battery as used in the X-T2, which gives the bigger X-H1 a reputation for chewing through batteries while out in the field.

I certainly appreciate the X-H1, at least on paper. And when others began to buy the X-H1 at the first discounted price and reported their findings, they were generally good to very good, which reinforced my initial good vibes about the camera. In particular is Kirk Tuck’s use of the X-H1 for his work, both stills and video. Except on occasion he has written how he misses the micro four thirds Panasonic G9 with the Olympus PRO 12-100mm f/4 zoom, calling the two the best travel camera ever. That’s what he was using before the Fuji’s. That’s the micro four thirds combo I have and will stick with until it dies or I die first.

Right now the X-H1 is selling for $999 for the body, the vertical grip, and two extra Fuji batteries (three batteries total if you count the one for the body). Sounds like a great deal, and I’m sure that it is, if you’re already invested in Fuji equipment. I’m not, so even if I decided to get one, I’m still going to have to invest in at least one lens to make the body useful. Then there’s the old adage, more or less, that half too much to pay is still too much to pay.

And before you say I should invest in full-frame, think again. Today’s cameras without exception, from smartphones through 1” sensors on up to 24mm by 36mm, are all excellent cameras. As I keep harping, there are no bad cameras any more, just bad photographers. It’s what the entire camera system can help you as a photographer, not how many pixels in the sensor nor the sensor size. At this point in time sensor resolution and size should be the last two criteria you consider. If it’s the first, then you’re a fool wasting your money.

I’m turning 66. I come from a time where pretty decent 35mm film cameras were mere low hundreds of dollars for both a body and a 50mm lens. My first 35mm camera in the early 1970s, the Yashica Electro 35 GSN, was $125. It came with a fixed mount Yashinon 45mm f/1.7 lens. It was a rangefinder with autoexposure (hence the Electro name). I enjoyed using it, especially with black and white Plus X (ASA 125), which was the cheapest film and printing combination at the time.

My next ‘serious’ 35mm camera was a Minolta SR-T MC which I purchased from J.C. Penney, back when Penneys had a dedicated camera section and sold cameras made by Nikon, Minolta, Kodak, and Polaroid. When I worked at Pennys during that period, I got mine on employee discount. It came with a wonderful Minolta 50mm f/2 normal pancake lens. I loved that camera. After discount it cost all of $150 new.

You see the pattern here. I kept my basic camera costs at $200 or lower, the lower the better. I didn’t see such low prices in digital cameras until Olympus decided to stop making it’s E-PL1 and E-PL2 cameras and thus sold them at tremendous discount to clear them out. When that happened I picked up both at around $150 each (at different times) and that included the kit zoom lens (14-42mm f4/f5.6).

I have to be careful extolling the virtues of prudent camera buying. I’ve always tried to spend as little as possible, especially in this day and time, but even though my last few cameras were very heavily discounted, they were still expensive. It would be hypocritical of me to say otherwise. In spite of my past excesses (or perhaps because of) I can’t afford the X-H1 body because I can’t afford investing in the Fuji X system, which would have to include the purchase of new Fuji lenses to make the X-H1 useful at all. As much as I love Olympus, even with all their current discounts on Olympus gear, I can’t afford anything from Olympus either.

One question that keeps being asked is why Fuji marked the X-H1 down so far, so fast. The answer is that it didn’t sell as well as Fuji management wished at the original MSRP, so they cut it to US $1,200. Panasonic did the same thing, to the same price, with their G9 (I know, I got one at that price). Then Fuji cut it again to US $999. That’s because Canon, Nikon and then Panasonic introduced full-frame mirrorless to compete with Sony earlier this year and started causing problems for the X-H1 as collateral damage. Canon, Nikon, and now Panasonic have in turn discounted, sometimes quite heavily, prices on these new bodies. That’s because they can’t sell their new cameras at the prices nor at the quantities they would like to. Those discounts don’t make them any more affordable to folks like me; remember to add in the cost of those even more expensive lenses to use on the bodies.

The entire classical camera industry is undergoing major shrinkage now, shrinkage which began at the start of the 2010s. As we head into the 2020s, the downward sales pressure is only accelerating. I personally am no longer in the market for any camera equipment from any manufacturer, and I’ve heard the same from many local colleagues. I can’t afford any of it because it’s now all priced outside of my “discretionary” budget. The prices keep going up, and when they come down due to discounts and sales, they’re still too high to justify.

I predict that over the next three years a lot of cameras and possibly their makers are going to disappear from the market. I suspect that Panasonic, both in full frame and micro four thirds, will shrink heavily if not pull out completely. I also expect the same to happen to Olympus, as they’re micro four thirds only. As for Canon and Nikon I expect Nikon to shrink rather drastically. I can’t think of a single manufacturer who will come out of this unscathed. The world can no longer afford to buy such expensive gear anymore, let alone to upgrade it on a regular basis. 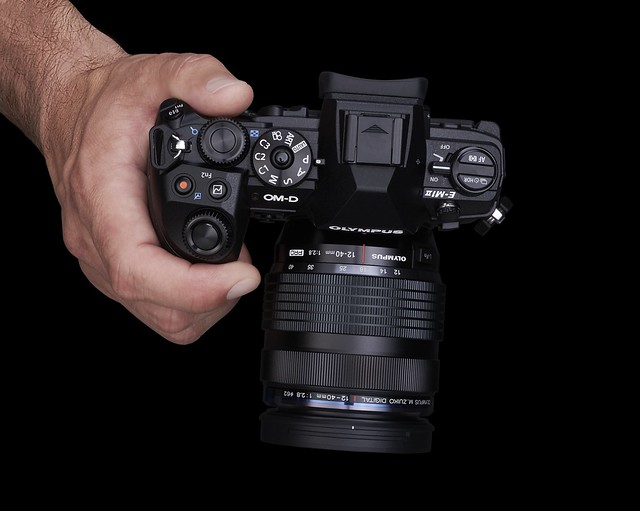 I’m going to purchase a copy because it does everything that a professional body does, especially in the critical features of auto focus and focus following. And it does it in a body that doesn’t need a friggin’ oversized, and overpriced, 35mm sized sensor (what is euphemistically referred to as “full frame”, for a film size that was originally called miniature because of its size compared to medium format).

I’m heavily invested in the µ4:3rds system, including the 12-40mm zoom shown on the body. I have a number of primes, and look to invest in a few more, such as the 1.2/25mm. I’ll concede I already have the Lumix 1.4/25mm, but I want that lens with the extra half stop. And the incredible performance. I might even break down and get the 4/12-100mm. You’ll note the pattern here. These are all PRO lenses. Am I going pro at the tender age of 63? I doubt that, but I’m a stickler for the technical side, and before I’m forced to retire and can’t afford these any more I want to finish out my system. I’ll still have the three E-M5’s I’ve picked up over the last four years (one at full price, the other two heavily discounted, including an Elite Black body for $400).

Folks will tell you that you can get a better deal by buying the Nikon D500 or the Canon 7D Mark II. The problem with this is replacing all that glass I have with equivalent Nikkors or Canon EOS lenses. No thanks. The E-M1 .2 is a highly refined Olympus camera, both for the brand and the camera system in general. It’s overall operability is second to none. With the very fast glass and the enhanced IBIS good up to at least six stops I don’t have to worry about having astronomically high ISO requirements. I’ve seen photos hand held up to 15 seconds that’ve come out sharp and high quality, and in the sizes I like to view and print, they’re indistinguishable from any other camera, including the much more expensive “full-frame” DSLRs.

I’ve waited a long time for this camera. I’m ready to purchase my copy.