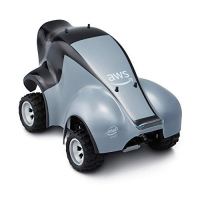 For reasons that I can’t fully fathom, but which include some degree of schadenfreude on my part, I stumbled into the DeepRacer page on Amazon. It’s now selling for $349, which is $50 off the original price of $399. That’s a hefty chunk of change for me either way, especially when I put in an initial order back in December 2018 for a mere $250.

Sometime in late 2019 Amazon finally shipped it out, which had to have been sometime in October or November, because I waited until September of 2019 before I just canceled my order. Based on user comments, it’s a good thing I did. It ain’t very pretty. Let’s take a peek!

The product was delayed three times almost a year later after the order was placed. The product remains pretty primitive in terms of extra length wires, difficult to access switches, foggy displays. There is no development environment setup for the racer on AWS. Neither were there in the cloud a simulator of the racer hardware as claimed in the advertisement. Also I can not find a procedure to down load the software into the racer again as claimed.

The return window was closed when I decide to return it about 4 months after I received it although I had only a chance to work on it for a few days due to holidays and travels.

The product needs quite a bit of development before it is ready for commercial launch.

(1 star) Get DeepRacer finally but it doesn’t work

I got the DeepRacer today finally after waiting for about one year. Cannot wait to open the box and take a look. All the parts are included as the online video describes. There is a very obvious scratch on the shell. See attached photo. Seems like the packaging needs to be improved.
After charging the batteries, followed the online videos to assembly the car and connect it to WIFI successfully. But always got error “Vehicle battery not connected” when trying to calibrate it. Tried to disconnect/connect the battery and switch on/off it for a few times, but no luck. Don’t know what is wrong with it.

Really disappointed after waiting for such a long time and getting a not-working product.

(1 star) Does not work. Red error light and no way to get past it.

I have a deep racer car and all I get is the red light light. It won’t boot and can’t get it to go into the bios. I have tried multiple keyboards and created a bootable usb drive to reset it and still just a red light.

Car has 2 big holes in the front where it has cracked and broken. V disappointing after waiting so long for it to arrive

Delivery was delayed 3-4 times, and resulted in a year of waiting.
The goods:
– The setup is straight forward with the online manual and instruction videos.
– Car has suspension and seem durable.
– System runs on Ubuntu 16.04. Easy accessible and configurable.
The bad:
– Motion battery runs out after 10 minutes.
– Camera feed is flaky. Sometime it doesn’t work, and requires restart. Happens about 40%.
– No software simulation. Hard to debug, and hard to understand the issue from the software standpoint.

I think I’ll stop here. You can read a lot more by following the link to the product. If I were an executive at Amazon I’d be deeply embarrassed over how this entire product has launched and shipped. But this is Amazon after all, so they really don’t care.

They don’t have to, they’re Amazon. 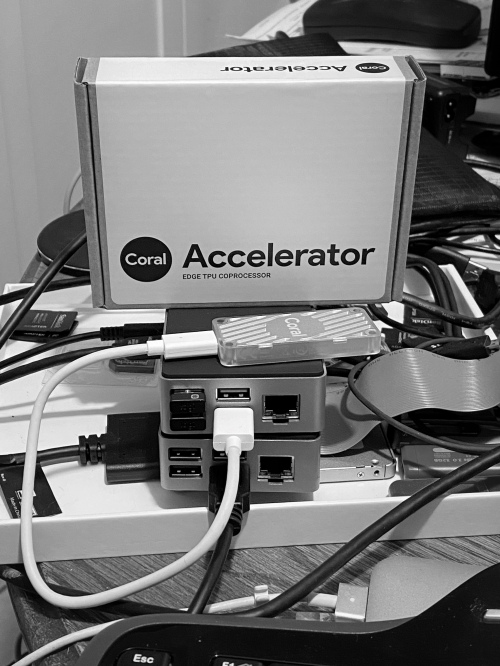 Continuing with the same 2GB Raspberry Pi I used to try out Ubuntu for IoT, I reloaded it with Raspbian Buster and plugged Google’s Coral Accelerator. I’d gotten it yesterday for $75 from Amazon. The Raspberry Pi 4 comes with two USB 3 ports and a reasonably up-to-date and fast quad-core CPU. I had given serious consideration to purchasing Nvidia’s Jason Nano, but it came with its own support SBC with a CPU no better than a Raspberry Pi 3, and to top it off I’d have had to install and learn the peculiar ways of yet another Linux distribution for the Nano. The monitory difference between the Coral and the Nano is inconsequential; the cost is the much larger investment in time required to master yet another Linux system as well as using the Nvidia GPU. I have neither the time nor patience for that anymore. Give me something that I can quickly plug into and use with what I already have.

Getting set up and running was super fast. It took about 15 minutes to go online for the setup directions, install the Coral support libraries, git clone an example, plug in the Coral, and then run the example. The example ran successfully. All the steps where very straightforward and fast.

I then decided to run a secound example, this time Google’s detection example.

It’s difficult to see if you don’t zoom into the screen capture, but if you do you will see Admiral Grace Hopper’s tie is identified and a red box drawn around it. This is test #2, and a bit more interesting than the first test.

Not much more to offer at this point as all I’m doing is pulling the examples and giving them a spin. I’ll work on writing something more original when I better understand the system. Fortunately all the higher level software is written in Python. For me it’s a joy to work with Python, especially version 3, on any system.