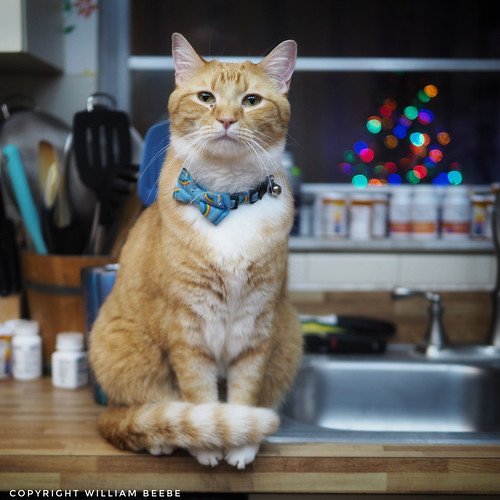 A Christmas Caturday is a special Christmas Day and a special Caturday. So in that spirit I present a series of cat photos (along with one of Annie the Doodle) to help celebrate the Christmas season. The first photo in the sequence is Luke in his usual morning kitchen location, with our Christmas tree in back and out of focus. And his classic look… 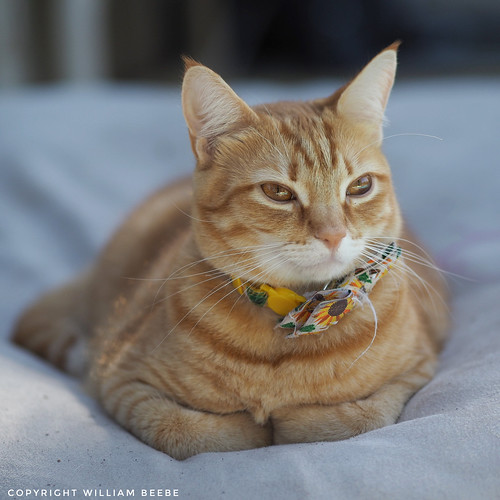 Danï with all her toes pulled in and looking fabulous. 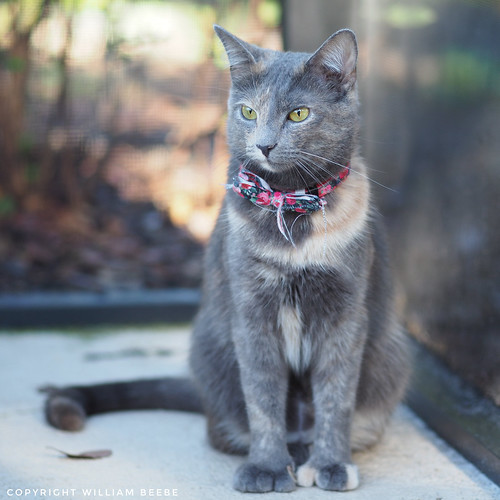 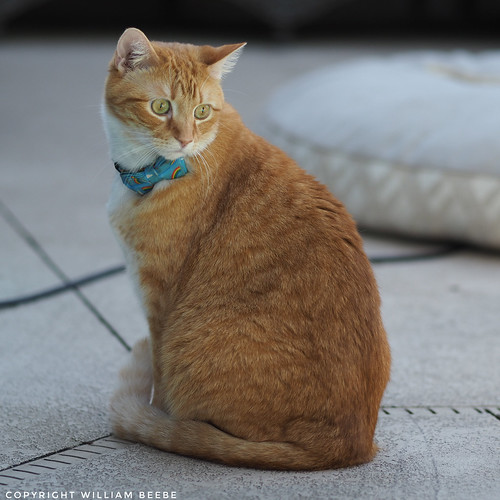 One more of Luke looking coy. 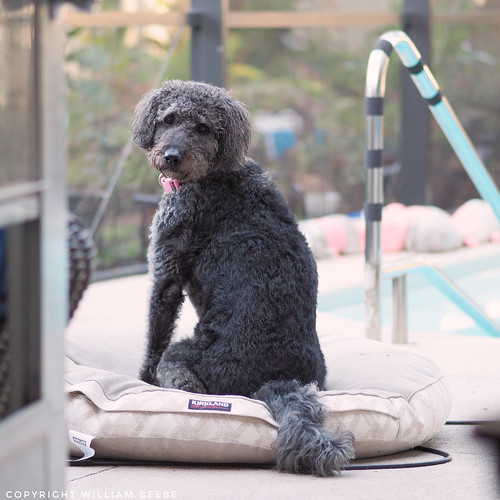 Last, but by no means least, Annie looks around to keep up with a house full of cats.

Except for the first photo, which was taken with the Panasonic Leica 1.4/25mm, all others were taken with my Christmas present to me, a heavily-discounted-because-it’s-refurbished Olympus M.Zuiko 1.8/75mm prime. I got it because it’s my little gift to me for a long year, and because refurbished it was less than half the prince of the 1.2/45mm PRO, making it a lot more affordable.

As far as I can tell so far it’s an outstanding lens even wide open at f/1.8. At a 150mm equivalent it allows me more distance between the animals and myself, helping to better catch them photographically. I used to be a heavy user of 135mm film lenses from Minolta and then Olympus, so working with this lens isn’t a challenge at all in spite of a number of 75mm lens reviews.

The body on all these was the Pen F.

It’s been a good eighteen months since I worked with anything other than Pycom and Arduino in support of my paying project. I’ve certainly benefited from this effort, both intellectually and financially, but right now heading into Christmas and 2022, I need a diversion to help recharge the creative battery, and I need to go back and check the state of a number of my older projects. I combined the two efforts into one by checking on my Raspberry Pi 4 systems.

First thing to note is that the last time I logged into the Pi was back in June 2020. As soon as the Pi powered up and I logged in I tried the usual sudo apt update && sudo apt upgrade dance. And it failed. To make a long story short, I did manage to do a full upgrade to the latest 64-bit version of Raspberry Pi OS, the version built with Debian 11/bullseye. But it was seriously squirrelly in operation.

I backed up the pi account and development areas from the older card to a thumb drive, downloaded the latest image from  https://downloads.raspberrypi.org/raspios_arm64/images/ , performed a clean install of Raspberry Pi OS 64-bit using balenaEtcher ( https://www.balena.io/etcher/ ) onto a Sandisk Extreme 128GB micro SDXC card, rebooted with the new card, then copied everything back over, and carried on from there.

In the middle of doing all of that I took some additional time to try a few new distributions aimed squarely at the Raspberry Pi 4. They were Ubuntu 21.10 for IoT, Fedora 35 for IoT, and Pop!_Pi for Raspberry Pi 4. Here’s what happened with each to keep me still on Raspbian.

I’m back to doing some personal work on the current Raspberry Pi OS. The tools are up-to-date, especially Python3, and Python2 is not completely gone. I’ve got the last Go and Rust, and between those three I’m keeping busy. In fact, right now I’m moving all my little Go work over to modules. So far I’ve not hit any roadblocks. Once done I’ll check that in, and then move on to more physical computing.