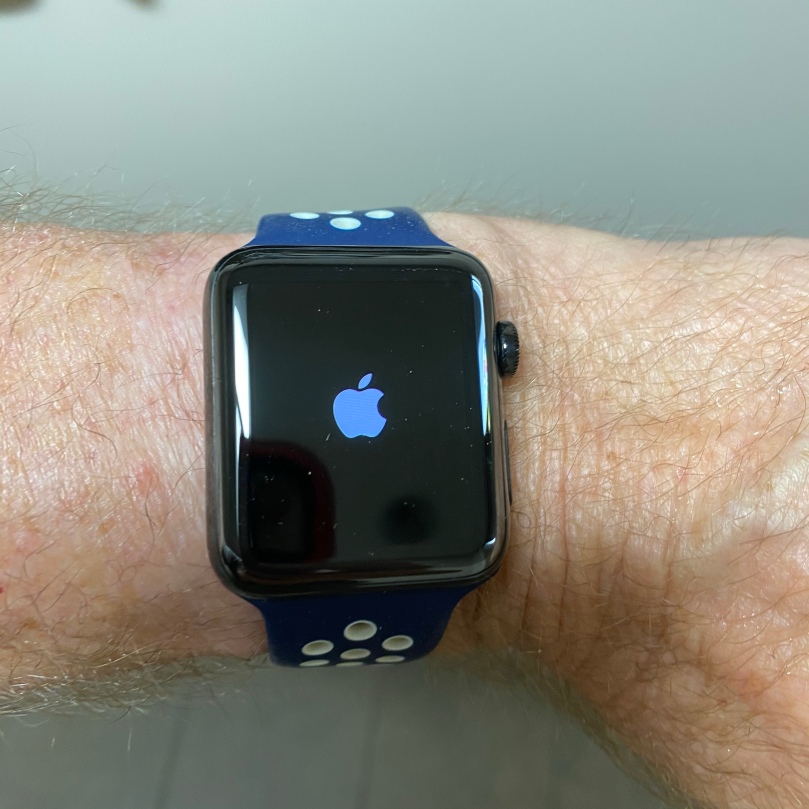 When you see an Apple logo on your wrist, you’ve got a problem. Really. I’ve caught it three times since updating to first watchOS 7, then watchOS 7.0.1, when my iPhone updated to iOS 14. The first two times my Apple Watch rebooted it was at my home. This time I was out on an errand, and I had both my iPhone with me and presence of mind to grab a quick snapshot before it finished rebooting.

I don’t know why it’s doing this. Notably I’m not the only user who’s seeing this random reboot issue with with a Series 3 Apple Watch. Here is an example article from Tom’s Hardware documenting it, with other issues: https://www.tomsguide.com/news/apple-watch-3-has-a-serious-new-problem-what-you-need-to-know

I haven’t suffered from any of the other problems listed in this article, but the fact I’ve stared at the Apple logo boot on my watch when I wanted to check the time is annoying as hell. Once again Apple’s software developers [sic] have screwed the pooch, this time on my Apple Watch Series 3.

I’m working with Pycom ( https://pycom.io/ ) IoT devices. One of the tools they supply to work with their devices is a plugin named PyMakr. They have release a version for Visual Studio Code and Atom. The version for VS Code has never worked on my MacBook Pro 15″ or 16″. As a consequence I’ve turned to Atom just to run the plugin. It seems to work properly with Atom. But I’d rather have it work with VS Code, since I do everything else with VS Code.

Here is the setup for the software environment.

I’ve gone through all the recommended solutions that others say they’ve discovered, and none of them work for me. I’ve seen such error messages in the past on Unix/Linux systems and fixed those error messages in fairly short order. The biggest source is usually a bad shebang at the top of the script. Fix that, and those error messages disappear. But the JavaScript file has no execute bit set, and it appears from the other error messages that node is being used directly instead of invoked within the script itself. The path to the file, and the filename, are all correct.

To make this even more maddening, I have the same setup on a 2012 Mac Mini Server running the same software listed above, and it works. But when it comes to running on my MacBook Pro 15″ or newer 16″, it won’t work at all.