I will continue to refer to the OS as Raspbian because (1) that’s what they named it when first released and (2) it still says that on the operating sytem. Therefore the name has stuck and still sticks.

Here are the steps to install Docker and the Portainer container that provides your Docker installation with a simple, web-based dashboard.

Add the pi account to the docker user group so that you can execute docker commands without sudo:

Log back in and test Docker by installing and running the following container.

The container will run and tell you it was successful with additional information about Docker and its OS.

Install the next two containers. The first is a very simple http container.

Navigate to http://localhost with Chromium and you’ll see this:

Now add the dashboard container that implements Portainer for ARM.

Navigate to http://localhost:9000/ and create an admin password for the admin account. Once that is accomplished, you’ll see something very similar to this:

You’ll note that only two containers are listed, not three. That’s because earlier I removed the “Hello World” container. Here’s a detailed listing of the containers. 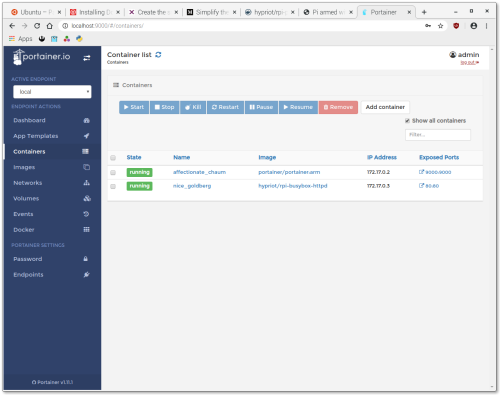 To manage any of the containers, you select that container’s checkbox. That enables all of the possible action buttons at the top of the page. Finally, here’s a check of the entire system.

The engine overview is a cleaner view of what you can get from the command line. It’s also a validation that the dashboard container is seeing everything it’s supposed to see.

If you want any container to restart after a re-boot, then you need to modify the container’s restart policy. Otherwise, on reboot, no containers are running. For example

It’s a limitation to this application I don’t like. I’m looking for something more comprehensive, or else, (shudder) I fork the application and “fix” it myself.