From the mouth of Torvalds:

Excessive line breaks are BAD. They cause real and every-day problems.

They cause problems for things like “grep” both in the patterns and in the output, since grep (and a lot of other very basic unix utilities) is fundamentally line-based.

So the fact is, many of us have long long since skipped the whole “80-column terminal” model, for the same reason that we have many more lines than 25 lines visible at a time.

And honestly, I don’t want to see patches that make the kernel reading experience worse for me and likely for the vast majority of people, based on the argument that some odd people have small terminal windows.

If you or Christoph have 80 character lines, you’ll get possibly ugly wrapped output. Tough. That’s _your_ choice. Your hardware limitations shouldn’t be a pain for the rest of us.

Longer lines are fundamentally useful. My monitor is not only a lot wider than it is tall, my fonts are universally narrower than they are tall. Long lines are natural.

When I tile my terminal windows on my display, I can have 6 terminals visible at one time, and that’s because I have them three wide. And I could still fit 80% of a fourth one side-by-side.

And guess what? That’s with my default “100×50” terminal window (go to your gnome terminal settings, you’ll find that the 80×25 thing is just an initial default that you can change), not with some 80×25 one. And that’s with a font that has anti-aliasing and isn’t some pixelated mess.

And most of my terminals actually end up being dragged wider and taller than that. I checked, and my main one is 142×76 characters right now, because it turns out that wider (and taller) terminals are useful not just for source code.

Have you looked at “ps ax” output lately? Or used “top”? Or done “git diff –stat” or any number of things where it turns out that 80×25 is really really limiting, and is simply NO LONGER RELEVANT to most of us.

So no. I do not care about somebody with a 80×25 terminal window getting line wrapping.

For exactly the same reason I find it completely irrelevant if somebody says that their kernel compile takes 10 hours because they are doing kernel development on a Raspberry PI with 4GB of RAM.

People with restrictive hardware shouldn’t make it more inconvenient for people who have better resources. Yes, we’ll accommodate things to within reasonable limits. But no, 80-column terminals in 2020 isn’t “reasonable” any more as far as I’m concerned. People commonly used 132-column terminals even back in the 80’s, for chrissake, don’t try to make 80 columns some immovable standard.

If you choose to use a 80-column terminal, you can live with the line wrapping. It’s just that simple.

And longer lines are simply useful. Part of that is that we aren’t programming in the 80’s any more, and our source code is fundamentally wider as a result.

Yes, local iteration variables are still called ‘i’, because more context just isn’t helpful for some anonymous counter. Being concise is still a good thing, and overly verbose names are not inherently better.

But still – it’s entirely reasonable to have variable names that are 10-15 characters and it makes the code more legible. Writing things out instead of using abbreviations etc.

And yes, we do use wide tabs, because that makes indentation something you can visually see in the structure at a glance and on a whole-function basis, rather than something you have to try to visually “line up” things for or count spaces.

So we have lots of fairly fundamental issues that fairly easily make for longer lines in many circumstances.

And yes, we do line breaks at some point. But there really isn’t any reason to make that point be 80 columns any more.

I haven’t paid attention to the 80 column limit in decades, and got in trouble over it on past programs. If I have a line limit it’s around 120 characters. Any unbroken line that long is an alarm to me to go back and ask why it’s that long, and if necessary, fix it.

As for “wide tabs,” I’m not sure what that’s all about, but in my code I always substitute four spaces/tab, and never use tab characters. Four spaces helps to view code structure at a glance while allow reasonable density in any given body of code. And all of today’s editors and IDEs will provide visual aids to show block scope, so that you can see any given scope in a block. It works with curly brace languages, as well as those that don’t use curly braces (Python primarily).

The original post’s instructions left out a few critical steps, and as a consequence, not everything was properly, and correctly, documented. More critically, additional setup utilities weren’t run and not captured/poorly documented. 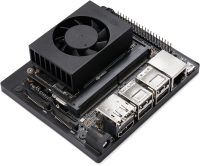 These are tl;dr instructions for guaranteed application building.

Then clone a copy of Jetson Inference. You can do this anywhere, but do it in a part of the file system where you have normal (non-root) access.

Create a build directory (mkdir build), and change directory into it.

During the cmake process step, two scripts will be run that will display ASCII menus within the terminal. The first menu is the Model Downloader. This is how it first appears.

Only two of the models are selected by default.

I selected all of them and downloaded everything. That’s because I’m working off the Western Digital Black SSD I installed and documented two posts back (see “adding a western digital wd_black 250gb nvme drive to jetson xavier nx“)

After selecting all the models, a second ASCII menu is presented to install PyTorch.

I personally skipped this one because I want to install PyTorch using my Python 3.8.3 virtual environment, which I also built for this NX a few posts back. Once I figure out how to install the PyTorch for Python 3.8.3 I’ll revisit documenting that specific step.

Once CMake is finished, execute make within the build folder.

Assuming you have all six NX cores enabled, and are building on an SSD (not the boot SDXC card), then it should build fairly quickly.

Now for the running part. As a very basic smoke test, attach a Raspberry Pi Camera Module V2 to the CAM0 port. That port is on the edge of the bottom circuit board right above the power barrel connector. You might want to power down the NX when you do this.

When you come back up change back to the jetson-inference/build folder, and then:

You should see something on your desktop similar to the following screen capture.

I’m in the process of testing out other features found in the Jetson Interface examples on the NX and will report anything untoward or unusual when time permits. My honeydew list is calling…