My work on the Raspberry Pi is a hobby of sorts, in which I bring to bear nearly 50 years of writing software in some language on some computer. I started when I was a highschool junior writing in APL on an IBM 360 mainframe. The little programs I wrote were games, in particular games to simulate landing on the moon (Apollo was important, and still flying, back then). Since that time I’ve programmed other mainframe, minicomputers (especially Vaxen), and just about every brand of microprocessor every developed. Now at the tender age of 65 1/2, I find I still enjoy writing software in some language on some computer. It’s just that right now, it’s C++ and Python on a Raspberry Pi 3 B+.

In this case, putting C++ aside for the moment, I want to talk about Python 3.5.3 and PyQt5 5.7.1. That version of Python comes standard with the latest version of Raspbian, version 9.9. I took this particular tack after wasting too much time trying to install the latest versions of Python and Qt5, only to scrub my Pi’s little micro SDXC card and start again. To get the tools I needed to create GUI applications on the Pi, I installed the following from the Raspbian repositories using apt:

I’ve used Qt in the past, going all the way back to Qt3 and finishing with Qt4 back around 2008. So I had a pretty good idea what Qt was capable of, especially the changes wraught by Qt4. At first I tried to write Qt5 applications purely in C++, only to find that the libraries available for Raspbian were incomplete, and to add insult to injury, the implementation of Qt Creator had the JavaScript JIT disabled, such that it was incredibly slow to operate, even for Raspbian on the Raspberry Pi. I tried to pull down the sources and build a local copy of Qt5 for myself, but since a single compile cycle for all of Qt takes multiple days building natively on the Pi, after going through two such back-to-back cycles trying to debug what the build failed on, I then turned to the Raspian repo versions of Python and PyQt5 and got on with my life. With Raspbian you have everything you need either installed directly or easily available via the repos. And if the tools aren’t the latest and greatest, well, so what. It all works and that’s all that matters at this point.

Once those packages were installed I started to look around for some tutorials to help me get oriented with PyQt5. I found a site with lots of examples, and started to code my way up the learning curve. You can see some of those very primitive examples on the screen shot above. Of interest was a link on the site to download all the source. I figured I could rifle through the code for the interesting bits and build on that, but when I clicked on the link I was invited to buy the course in order to get the source code. No thanks, so I went back and continued to copy-and-code. That’s when I came across the QTabWidget example, and ran into a number of problems as well as noting that some of the coding in his version was Wrong. First, here’s my listing with everything cleaned up.

If you’re following along, here’s his example.

Trust me when I say that my version works as advertised. Let me go over the issues and fixes:

I get all cranky when I come across badly written code that looks like it wasn’t really run by the author. The original looks like a poor copy of someone else’s code. I may (or may not) put up my own set of tutorials that are clean, correct, and interesting. And I won’t charge a penny for them. 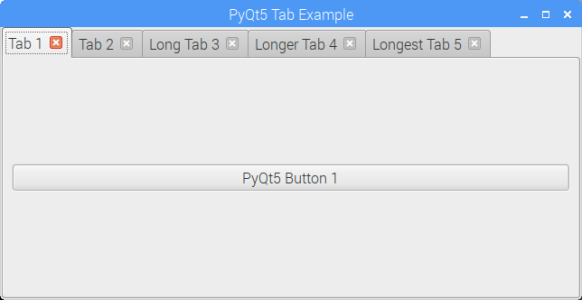 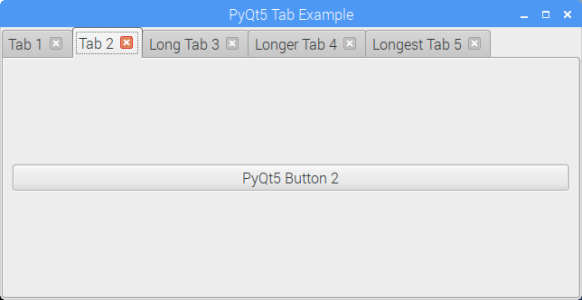 You’ll note I added two QButtons to make sure that the widgets were being properly managed by the tabs. If you have a Raspberry Pi and install PyQt5, then you should play with this and see what happens when you move tabs around or delete any of them, especially those with widgets. The tabs with widgets will clean up after themselves in my version.