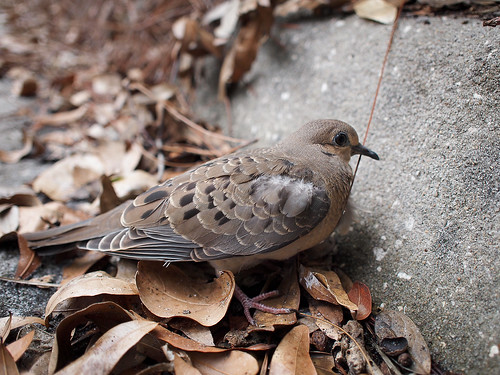 This photo was taken by me June of 2010, nearly nine years ago. I had a still-new (to me) Olympus E-P2 and I’d just picked up the M.Zuiko 17mm f/2.8 pancake lens. As I was out walking I came across this injured dove, and stopped just long enough to hold my camera down to its level and snap this quick photo. It had an injured wing and could only hop about on the ground. I took an instant sympathy to it, but left it behind because I was at work and couldn’t tend to its injuries. I still remember this dove, and even though I know it’s long since died, I can’t help but wonder what might have happened to it. There’s a lingering bit of guilt that I left it behind, probably to die later that evening from some predator in the area.

This little photo reminds me of how fragile life it and how it should be cherished as much as possible. All life.

And I’m also reminded that in spite of its limitations, the E-P2 was, and still is, quite a capable camera when used properly. I still have it and I still use it on occasion. The lens is long since gone, one version having been sold, and the second having been given away to one of my daughters.

We demand too much of life, of resources, of the things we buy and own. We’re too quick to condemn a camera because we’re too easily convinced by others that our camera selection wasn’t good enough. I’m guilty of that, and the collection of four thirds sensor cameras I have in my house is silent testimony to that. But when I take the time to re-view all my photography from all those cameras I find I’ve grown quite satisfied with the results, as if I can finally like my own work.

There are no such things as bad cameras, and there haven’t been since at least the release of the E-P1 and the E-P2. Only bad photographers.