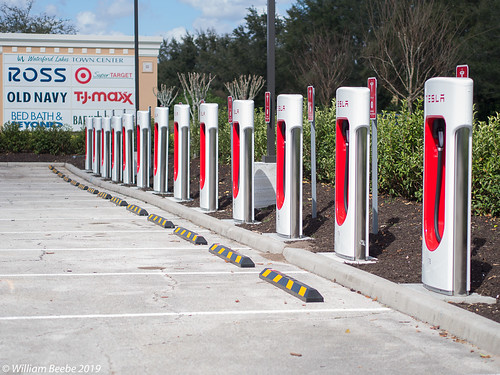 There is now a row of shiny new Tesla chargers in a back parking lot at Waterford Lakes in Orlando. Not being a Tesla owner myself I have no idea if they’re a super-charger. It’s been something of a six month project to get them installed in the second half of last year, and then they were blocked when Waterford Lakes held its traveling Christmas Carnival in that same back parking lot.

Why they would put them in such an out-of-the-way location is beyond my mere capacity to understand these things. I’m assuming that you drive your Tesla up to one, hook up the charging cable, then wait for the Tesla’s battery to fully charge. Then you detach, put the cable back, and drive away. The reason why I wonder why they’re so far in the back is that Tesla chargers have been undergoing a bit of vandalism as of late, as well as ICE (Internal Combustion Engine) treatment, wherein a big honkin’ truck driven by a big stupid redneck parks in a slot and then walks off. But seeing as big stupid rednecks are also a bit lazy, it’s probably a good idea. Otherwise they’d (gasp! horror! shock!) have to actually walk a bit to get to anything in the shopping center. So maybe there is some method to this madness. 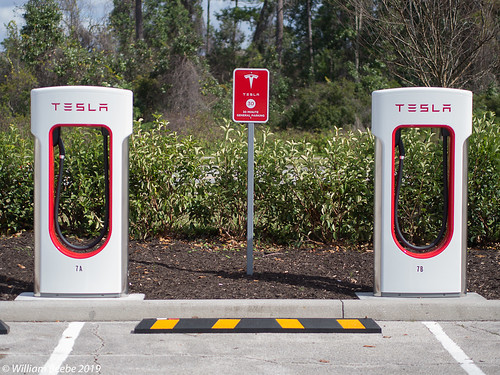 The sign next to each of the chargers says parking is limited to 30 minutes, so I can only assume that the Tesla will be reasonably charged (perhaps fully) in a half hour.