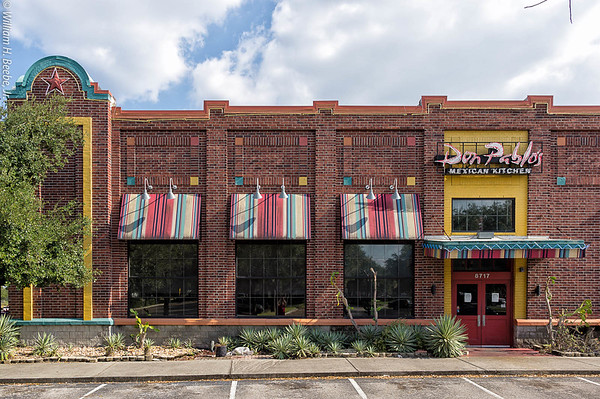 Don Pablo’s in general, and this one in particular, have been a staple of the family’s restaurant eating for as long as they’ve been in Orlando. I’ve literally watched them come into Orlando, and over the past ten years, since the start of the Great Recession, I’ve watched them leave one-by-one. This particular Don Pablo’s was on International Drive, and is the second to last to leave. The only other DP I know of is the one still open up in Sanford. Here’s the interesting sign taped to the front door.

Which begs the question of how this all went down. The last sentence is quite telling, as this indicates that not everybody knew this was coming.

Ever since the Great Recession started in 2006, the Orlando economy has been fragile, with “first mover” companies such as Don Pablo’s leaving behind behemoth buildings such as this one to be occupied multiple times by different businesses. The Don Pablo’s built over on University near UCF went through three different local bars (with the word Knight or Knights in the name) until it was finally bought and converted into a Buffalo Wild Wings sports bar. The Don Pablo’s next to West Oaks Mall had its interior built out into three long stores, one of which is out of business again. The architecture is distinctive enough that you can still recognize them dotting the landscape, just like the old Circuit City stores.

I used to write about this on my old blog. It would appear I may start writing about failing businesses again, especially with the election of Donald Trump.

The 8 November elections have delivered what I feared, Donald Trump as president. He is without a doubt the biggest ass clown we’ve elected to public office, and we’ve certainly elected quite a few since 2000 (Ted Cruz being the worst before Trump). The fact we elected him to the most powerful political office of America, if not of the world, is a slap across our collective Democratic face and shows just how far we’ve sunk as a nation.

I could go on about how this group or that individual contributed to the loss we Democrats suffered, but to be brutally honest we all fucked this up royally. We’ve been ineffectual and out-of-touch with the real issues starting with Ronald Reagan’s presidency and moving forward. Many  forget that when Obama was elected in 2008 that the Democrats also had majorities in both houses of congress. That majority started with the 2006 mid-terms when Democrats gained Senate and House majorities during the second Bush term. The 2008 elections increased the majorities the Democrats held. Yet, in 2010, the House switched sides back to Republican control, and it’s been there ever since. The losses to the Democrats in 2010 were the highest not seen since the end of WWII. Furthermore Republicans picked up more governorships and state house seats than at any time since the late 1920s. 2010 was a huge wakeup call to Democrats, and yet the Democratic party behaved in, at best, a lethargic manner.

The problem with both Democrat’s and Republican’s political legitimacy has been the loss of economic and political power in the middle class. The Democrats in particular deserved this stinging rebuke because they abandoned the middle class that helped propel them to power, as well as many key demographics, especially African-Americans. Whether it was Occupy or Black Lives Matter, Democrats in general and Obama in particular looked the other way. We expected that from the Republicans, but the Democratic apparatchiks were too busy raising funds on Wall Street and Hollywood to care about who originally took them to the dance, to know what was happening or to care. As far as they knew everyone was living large, just like them.

The one Democrat who tried to sound the alarm for all Democrats was Michael Moore (5 Reasons Why Trump Will Win), who’d seen what decades of unfettered capitalism had done to what we now refer to as the Rustbelt of America. That’s Michigan and Ohio and Iowa and Illinois, Kentucky and Pennsylvania, big reliably Democratic states from the Twentieth century that first swung to the Republican column at the start of the Twenty First, and then simply voted for Trump as a repudiation of both Democrats and Republicans. Moore’s been documenting what the economic policies of both Democratic and Republican administrations, starting with Reagan, have done to the American middle class. This started with “Roger and Me,” a documentary about the regional economic impact of General Motors’ CEO Roger Smith’s action of closing several auto plants in his hometown of Flint, Michigan starting in 1986. All you had to do was open your eyes and truly see what was happening, and had happened, in those once staunchly Democratic regions, cities and states.

As for African-Americans, the fact we even have a Black Lives Matters movement shows how ineffectual the Democrats have been for their causes, which is to live in peace now without getting killed while [fill_in_the_blank] Black. The current state of affairs has its roots in the 1994 “Violent Crime Control and Law Enforcement Act” written by then-Senator from Delaware Joe Biden and passed by Bill Clinton, fine Democrats both. The upshot of this law is that a disproportionate number of African-Americans are in federal prisons (not to mention that with only 5% of the world population we have 25% of the world’s prison population). In hindsight it now appears that a large subset of African-Americans did not vote for either candidate in 2016. Can you blame them? (And before you say anything, Hillary did not label African-American youth as “super predators” in 1996.)

We all have to assume responsibility. And when I say “we” I mean all the Boomers who produced and put Trump into office. In my case I didn’t work hard enough at a grass-roots level here in Florida to support the Democratic party. Simply voting every two or four years isn’t enough. It never has been. Participatory Democracy such as ours demands full participation, or you wind up with the government you deserve. And by participatory I mean getting involved with people and helping people who really need it rather than closing your eyes, dropping your head, and hurrying past those who aren’t as fortunate as you are. If you want to know who’s responsible look in a mirror. Rather than recoiling and withdrawing, now is the time to honestly assess and get back into the fight. Too much is at stake to let the GOP loose on our country.