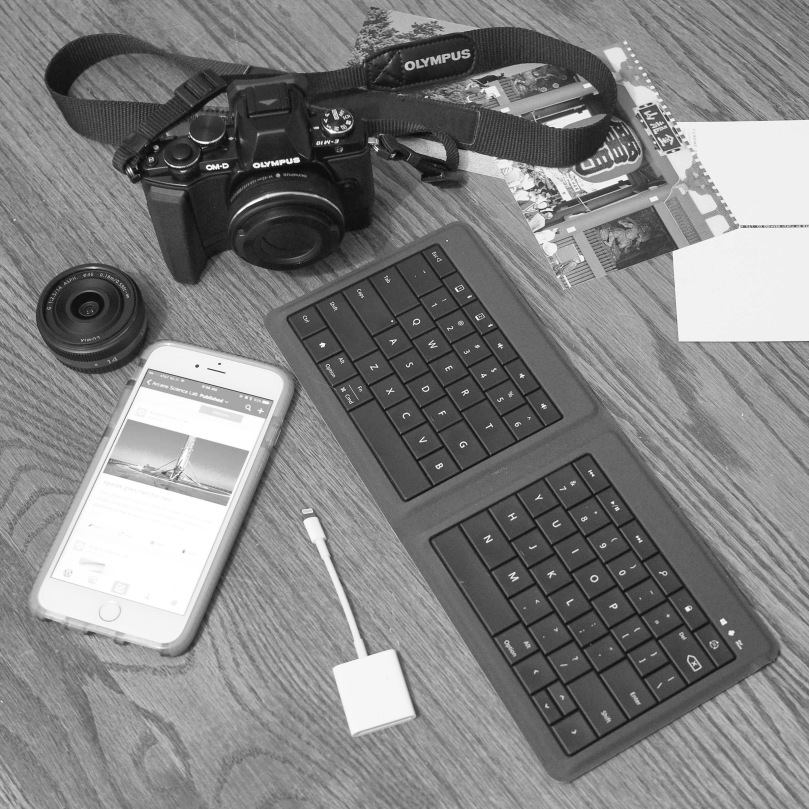 As a traveling photographer I’ve always been torn deciding what kind, and how much, camera gear to take on a trip. On my travels to just about anywhere I wind up stuffing a ThinkTank Retrospective 7 with at least two, possibly three, OM-D bodies, a half dozen lenses (both zoom and prime), and all the necessary support gear, such as extra batteries and chargers. That bag gets stuffed full.

To get it onto the airliner, I usually stuff that into the bottom of a roll on overhead bag, which just happens to have a change of undies, my toothbrush, shaver, and other extra paraphernalia that I consider too valuable to put into my checked luggage. And just to make sure I’m ready for anything I keep a single body out with a lens attached, just in case. Never mind that my iPhone 6S+ has an excellent built-in camera of its on.

Since my last trip to Japan in December I’ve been in town, specifically because of my knee replacement. But sometime around June or July I’m probably tasked to head out on the road again. Now’s the time to start thinking about what camera to take, as well as my blogging tools in general. I know that my style of long-form blogging is supposedly obsolete, but I know it and I might as well stick with what I know. And the folks that do follow me seem to like what and how I write, so there’s that.

The lede photo shows what I’ve managed to shrink my kit down to;

That’s the core. Since I have the Olympus 17mm f/1.7, I could swap the 17mm for the 14mm. It’s a little faster in aperture (f/1.7 vs the 14mm f/2.5) and certainly faster to focus, but the lens is twice as tall as the 14mm. Missing from this collection but no less important is a battery charger for the camera as well as at least two spare batteries. Other missing, but no less important hardware, is the charger for the iPhone. The Bluetooth keyboard is also chargeable, but it can hold a charge for at least 90 days, so it can be charged before a trip and the charger left behind. You shouldn’t try to write blog posts with the built-in software keyboard on the iPhone; that’s just asking for a bag full of hurt.

Some will ask why take the SDHC/SDXC adapter instead of using the E-M10’s built-in WiFi and the Olympus Share app on iOS. As someone who’s used that combination on both an iPhone and my iPad Air 2, I can say with absolute conviction you want to use the hardware adapter. Why?

Bottom line is buy and use the adapter. It works with any device that support the Lightening port. And if it breaks or you loose it, then you can use the app as your backup plan to move photos off the E-M10 and onto your iPhone. 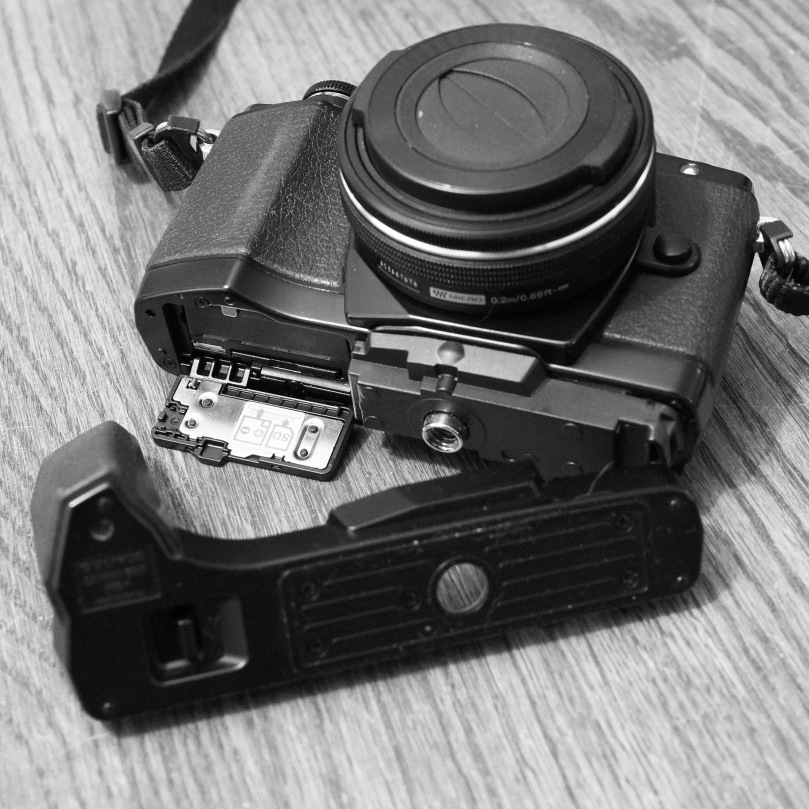 One extra I strongly advise you purchase for the E-M10 is the ECG-1 camera grip. It will add an extra, and welcome additional grip to the camera. It comes in two pieces, so that when you need to get to the battery to recharge it or the SDHC /SDXC card to remove photos, there’s a simple spring-loaded clip that allows the outer portion to quickly swing away, exposing the door on the bottom of the camera where both the battery and flash card are located. It will also provide additional protection for the bottom of the camera. At $45-$50 it’s the best accessory I can recommend for the E-M10 outside of a lens.

Which brings us to lenses. I’ve settled on the 14-42 EZ pancake zoom because, when powered off, it collapses into a very compact form. I’ve also purchased the Olympus LC-37C  auto open/close lens cap. It’s around $20 to $30, and worth the price. It replaces the clip-on lens cap and won’t get lost on a trip. It’s closed when the lens and camera are off and stowed, and opens when the camera and lens are on.

The pancake zoom works great in normal light, but for those occasions when you’re in darker areas, the Panasonic 14mm f/2.5 is an excellent alternative. It can be carried in any pocket and easily switched with the pancake zoom. From personal experience the 14mm focuses quickly and silently.

Oh, I forgot. The E-M10 has a built-in flash, which can come in handy when light is really bad. But I seldom use any flash.

As for general processing, I use JPEG straight out of the E-M10. If I need to post-process I use Snapseed, although you can use Apple’s Photos app for just about anything you’d use Snapseed for. I just happen to prefer Snapseed. Even the E-M10 has built-in post processing capabilities and all sorts of crazy art filters.

And if the E-M10 is too much, or the batter on it dies? Then you can fall back on the excellent iPhone camera. If I had a hard choice to make about leaving part of this kit behind, the first thing I’d drop would be the E-M10 and its support gear. The Bluetooth keyboard would be the last thing.

One thought on “a compact travel kit”