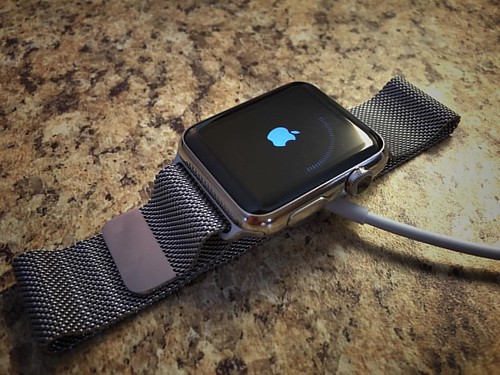 You’re looking at the first generation Apple Watch I received for Christmas. This was a very big surprise from my wife. I spent part of Christmas day pairing the watch with my iPhone, and then watching it download Watch OS 2.1; that’s what the photo is about above.

So far I haven’t had any major quirks with the watch except for one, where I couldn’t modify the application layout with the Apple Watch app on my iPhone (see below).

Every time I went into App Layout I got a continuous busy spinning “fan”. I fixed that problem by going into General | Reset | Reset Home Screen Layout. Once that was done I then re-arranged some of the apps, which is the layout you see above.

If there’s an issue I have with the Watch it’s that it’s loaded with apps I don’t care about. That’s the same situation as with the iPhone itself. But on the iPhone I can at least drag unwanted apps into a folder which is labeled “Extras” on my iPhone (in fact, that folder was already there). There is no equivalent on the watch. Perhaps in some future Watch OS release you can at least turn off the unwanted apps. I doubt we’ll be able to remove them, just like you can’t remove those “Extra” apps.

Overall I’m satisfied with the watch, or at least, very enticed. I was going to avoid this version and wait for Apple Watch 2, or whatever the next version will be named. But the software has already gone through a number of upgrades, now at version 2.1, which is a lot considering how recently it was released. My first Apple gadget was an iPod Touch version 2 back in 2008, and considering where the Touch was at that point in time compared to the Watch, I’d have to say the Watch has more polish. Besides, it has the cachet of being the original, which I suppose makes it something of a collector’s item over time.

The latest Xcode has support for writing Watch apps, so I’m going to give that a whirl. Perhaps after 30 days or so I’ll write up a more detailed user’s review. I do know one thing, I will never call it a wearable. That is such a lame category. The first pocket watch, the first clock to be worn on the body, appeared in Europe in the 16th century. Eye glasses are another type of “wearable” technology, which appeared in Italy around the 13th century. This was the use of optics to help humans see better. These are two types of wearable technology that go back centuries. Modern tech is a refinement of these very early inventions, following the same physical conventions.