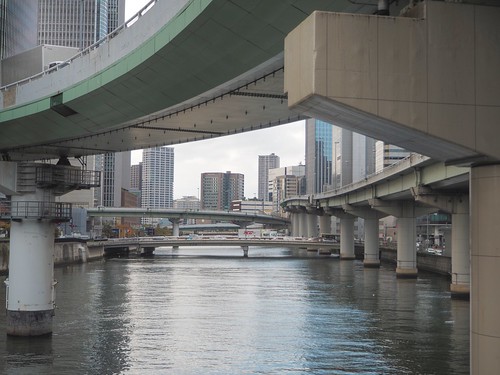 After a long, slow shower to both clean and sooth, I was sufficiently awake and aware to go outside and tentatively walk around the hotel. Right across from the front entrance is a broad pedestrian bridge where I grabbed a snap looking under the overpass from this morning’s view out of the hotel window. Looking around Osaka reminds me, more than any Japanese city I’ve visited so far, of many science-fiction Japanese anime settings; tall buildings close in together, multi-level roadway system, and waterways underneath it all. 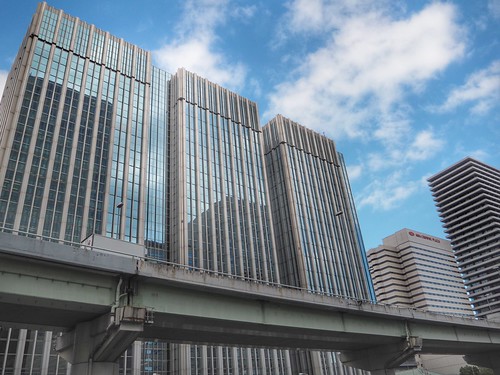 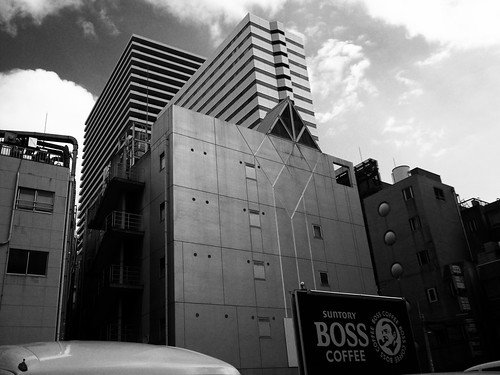 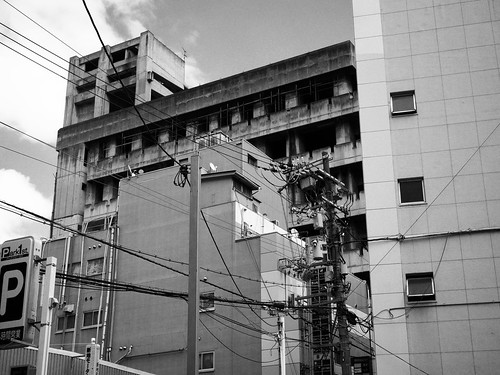 As I walked around I paid more and more attention to the autos that roam the streets. I noticed quite a few Nissan and Toyota vehicles which seemed to make up the majority. I also began to tune my seeing to Honda. 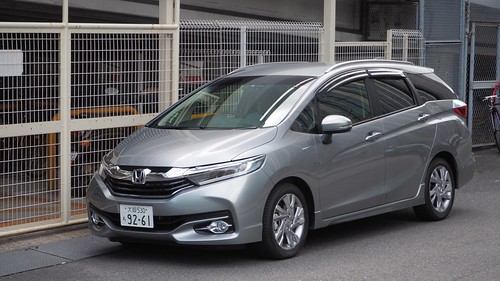 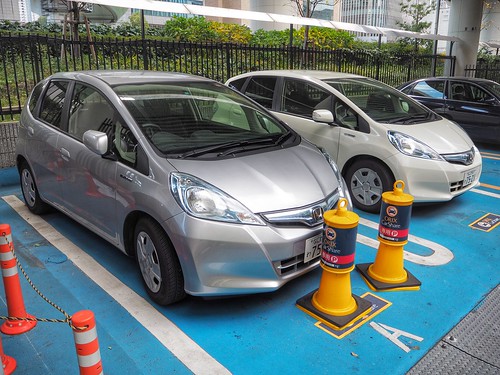 In every case I could spot, none of the Hondas I saw today looked at all like the Hondas being sold or driven in the US. The closest I came across was the vehicle at the top, which looks like a stretched version of the 2015 Hybrid Fit. The differences with this version in Japan and the American version is the wrap-around rear window and the entire front end treatment. The Japanese version still has the distinctive side sculpting. The two smaller vehicles in the Orix Car Share parking spaces appear to be Fit Shuttle hybrids, but again,  is very different from Fits sold in America. I should end this observation by saying I find all of them more attractive than any of the American versions, and wish they were being sold in America. I would have seriously considered them over the Toyota Prius. 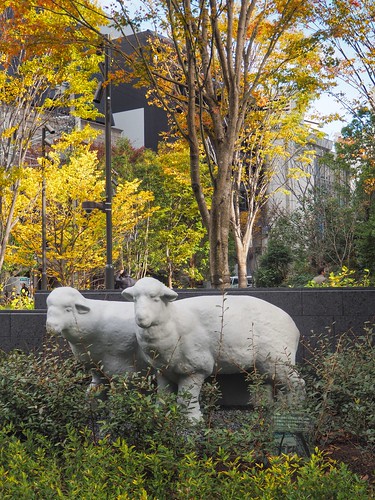 I end my casual walk about with a photo of these sheep sculptures near the hotel I’m staying at. No idea what they stand for. The closest I can come to is that 2015 is the Year of the Sheep in Japan.

The Olympus E-M10 came out in force today, coupled with the 14-42mm EZ pancake zoom. I could have used a considerably sharper and far more expensive 12-40mm lens, but then it would have stood out like a sore thumb. The results from this zoom are more than good enough for my needs. Along with the E-M10 I also have the iPad Air 2, which is again proving its worthiness as a photo viewing and processing machine. The nearly 10 inch screen size provides considerable ease over the iPhone’s nearly 5 inch screen size for this use case. I will use the iPhone over the iPad only when I’m in a situation where I only have the iPhone. Processing-wise the iPhone can perform as well as the iPad, but I much prefer the larger screen size of the iPad for this kind of work.

And speaking of the iPhone as a camera, I much prefer the conventional shape and easier handling of the Olympus over the iPhone as well as the E-M10’s much larger sensor. While I marvel at the iPhone’s picture quality, it’s in comparison to the Olympus. The Olympus is still superior in my not-so-humble opinion when you can use it. The reason I reach for the iPhone is because when I’m traveling I have the E-M10 tucked away in my back-pack and the iPhone is literally in my pocket, ready to be used. The iPhone’s ease-of-use is clearly superior over any camera in that particular use-case, but if I have a chance to pull out the E-M10 to use it, I will because the E-M10 trumps the iPhone just about everywhere else for my uses. Or to put it this way, in the past when I had the Samsung Galaxy S4 and my regular camera was packed away, if I came across a photo opportunity, I’d let it go by rather than try to use the S4 to capture it. The iPhone is the best smartphone camera you can own and use, bar none.

You use what you have under the conditions you have it and adapt accordingly. I’m fortunate to have both with me.