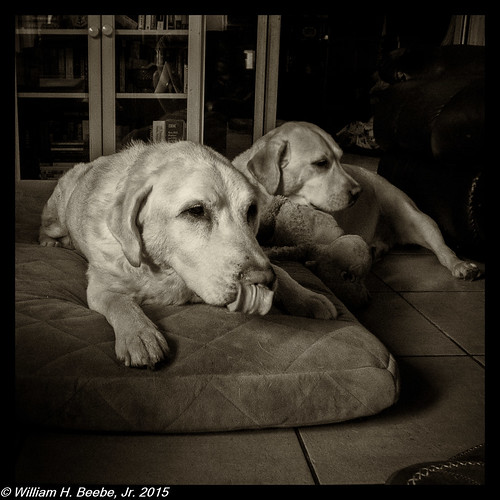 I spent the day working and getting ready to catch my flight out to Austin on Thursday. I’m facing another two-plus week in Killeen, just an hour north of Austin. I’ve been watching all the weather reports coming out of Texas and following the forecasts on my cell phone via Weather Underground. Looks like tomorrow will be partly sunny, enough for me to fly into Austin around 10am local time without running into any bad weather. But after that, looks like lots of rain for me to face. I’ve even packed two umbrellas.

I grabbed this frame of the two Labs with my old original E-M5 (I now have two) and the 15mm body cap lens. Just because. I exposed it using the Gentle Sepia art filter, but when I got it out of the camera and into Lightroom, I decided to crop the original raw and then run it through Silver Efex Pro 2. Again, just because.

I’m going to miss those two. Especially Max. This is Max’s last hurrah. His evening walks are limited to the local cul-de-sac right across the street from my home. We take it at his pace. His hips are giving out on him, and it’s not unusual for me to go back and give him a boost back up on his feet when his rear end collapses. What’s startling to me is how quickly this has taken hold of him. Back in February (was it just three months ago?) he was still going on what I’d call a regular, if slow, walk. But these days he picks the cul-de-sac every time. Even he has come to recognize his limitation.

What hits me so hard is his mind is still there. And he knows. 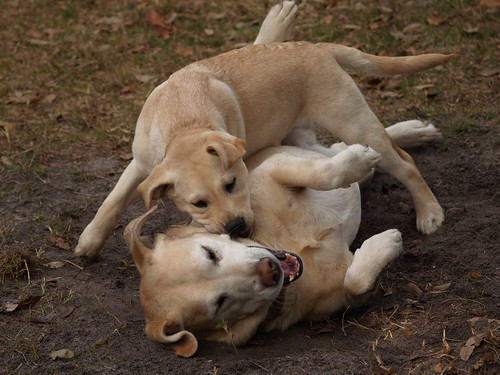 This is what the two of them were like back in 2008. Ruby is four months and Max is just seven. This year, if Max makes it, he’ll be 15 in August and Ruby will be seven herself. And just to show how far I’ve come with cameras, that one was made with an Olympus E-300 FourThirds DSLR and the original 40-150 f/3.5-4.5 Digital Zuiko. I’ve used a lot of Olympus digital cameras since 2006, or nine years. I bought that E-300 in March of that year.