Today was supposed to be a day of light adventure, a dry run to learn how to navigate the Japan Railway subway system to the point I could get around without getting totally lost. It would have been more elaborate but I’m still trying to finish out my right ear infection, so I was still tired and took another morning nap for about an hour, ruining my big plans to actually leave Tachikawa right after breakfast.

As it turned out I didn’t leave for my big adventure until around noonish. I went to the Tachikawa train station and paid my 470円 for a one way pass to Shinjuku. I managed to find the right platform and board the right train. The only problem is I wasn’t paying close enough attention to when they announced the Shinjuku stop. When I finally noticed I’d already ridden right past it. I finally got off at the Tokyo station, and started to look for a way back to my original destination. That’s when I found these folks on the platform, waiting to head to Shinjuku themselves. 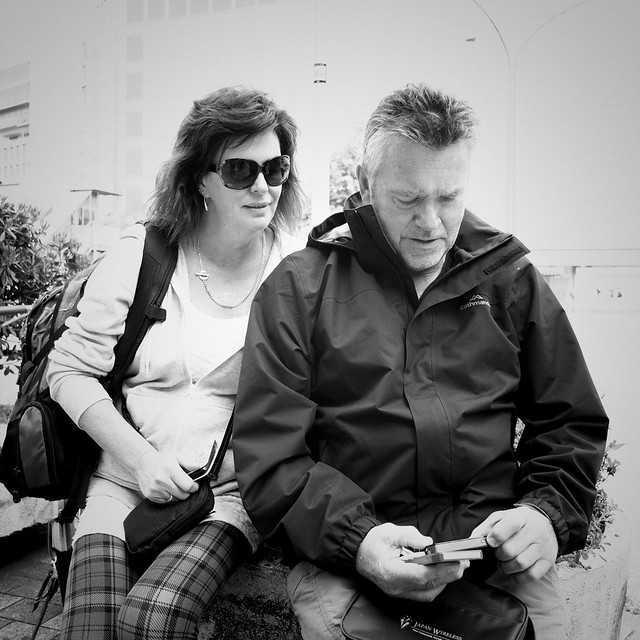 They were a very nice vacationing couple from New Zealand going to see their son, who’s currently living and working in Shinjuku. Between the three of us and a very helpful Japanese lady who understood Shinjuku and who figured out we all three needed help getting there, we got on the right train and got off at Shinjuku station. After leaving the station we said goodbye and good luck to one another, then headed on our separate ways. As it turned out I exited the station right in front of Yodobashi Camera. 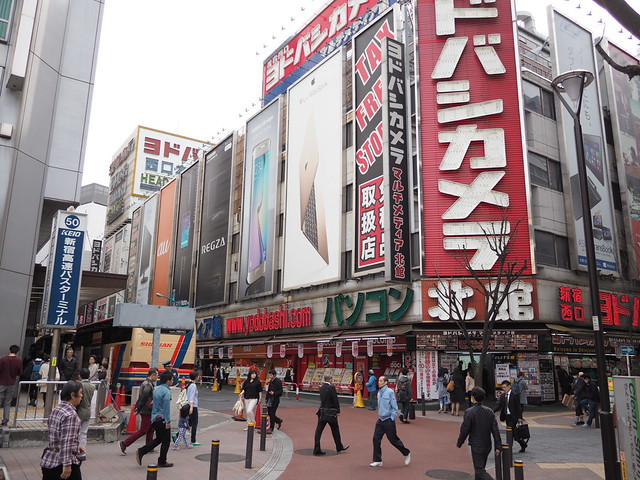 Funny thing is, I was supposed to go visit Map Camera, an all-camera camera store. But I couldn’t find it (to be honest I wasn’t looking all that hard), and I was taken in by Yodobashi and the memories I had of it some two years ago in Sapporo. But as it turned out, this Yodobashi was something of a let down. Out of eight floors in that store, the cameras were tucked into a corner of the first floor.Yodobashi now sells just about everything there is to sell in consumer goods, not just consumer electronics. There was more space given over to selling Apple and Apple geegaws than there was to all the camera brands they had stuck over to the side. 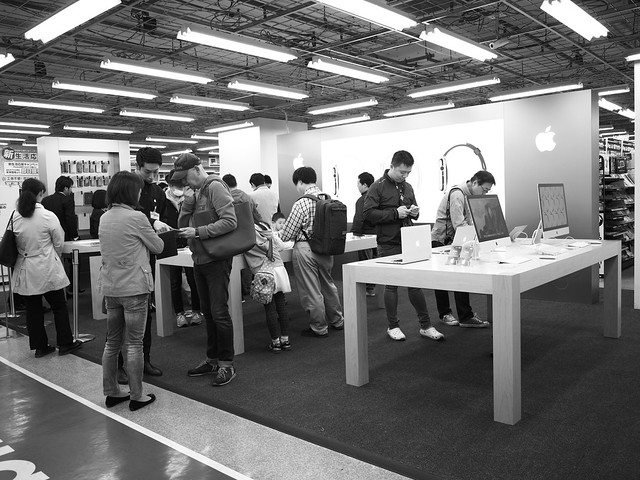 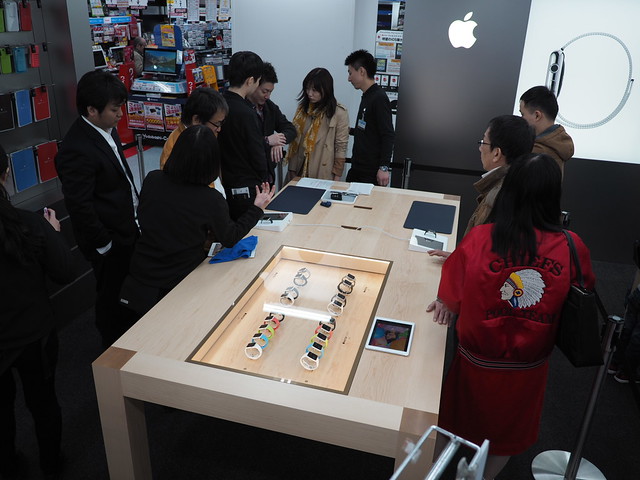 Sure enough the Apple Watch was on sale, and in spite of what the photo indicates, there was a large crowd hanging around to look at this new product from Apple. Whether that translated into sales or not I have no idea. But it sure was crowded (this one photo was taken with me sticking my camera over the crowd just to get this shot). I don’t know about the rest of the world, or even the rest of Japan, but I have a feeling the Apple Watch may just yet turn into a raging sales success. Only time will tell.

Once I got out of Yodobashi I just wandered around, sort of soaking up the ambiance around the train station. I have to say it’s the largest train station I think I’ve ever been in, even larger than the one in Sapporo, or at least rivaling it in sheer size. 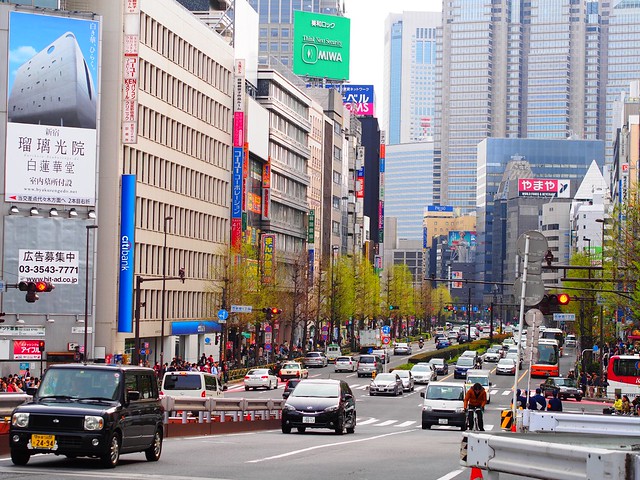 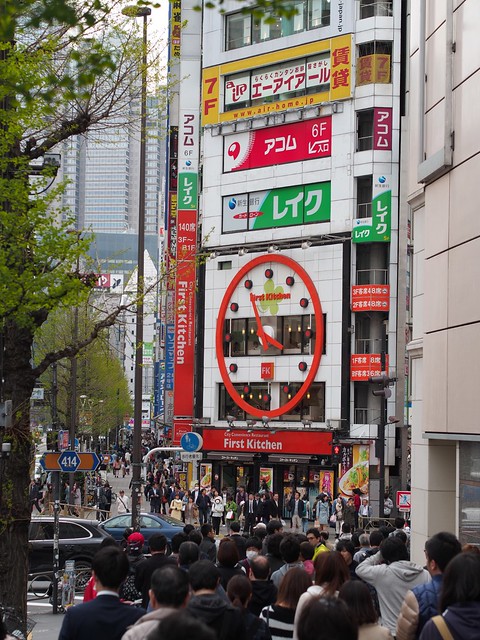 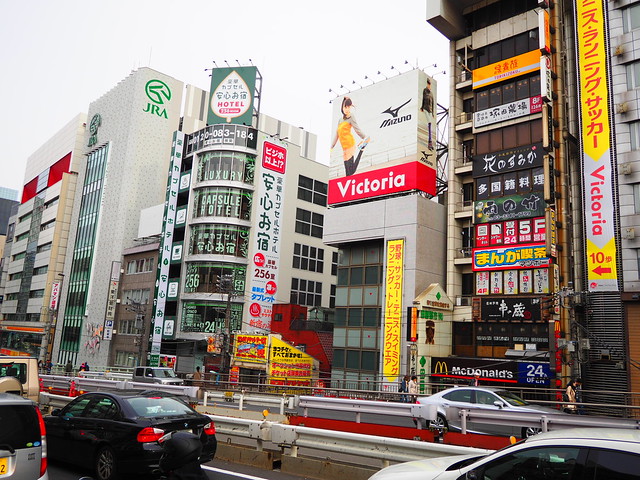 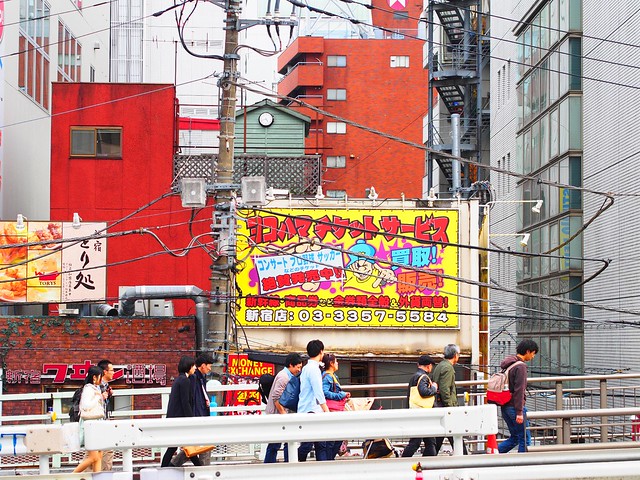 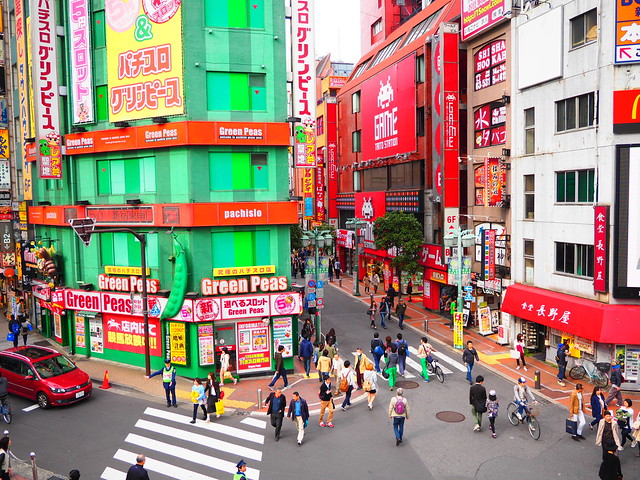 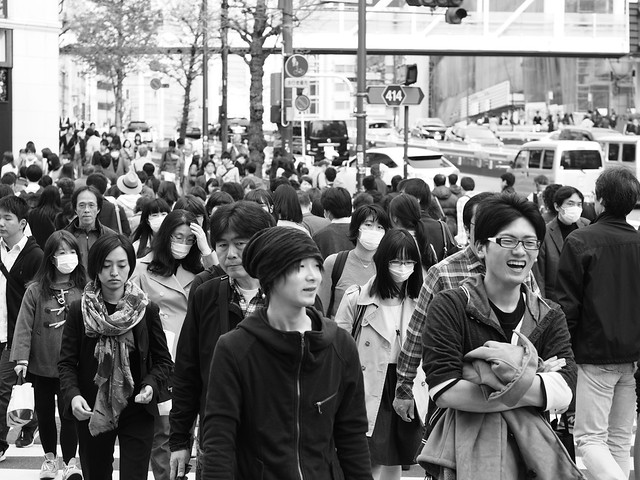 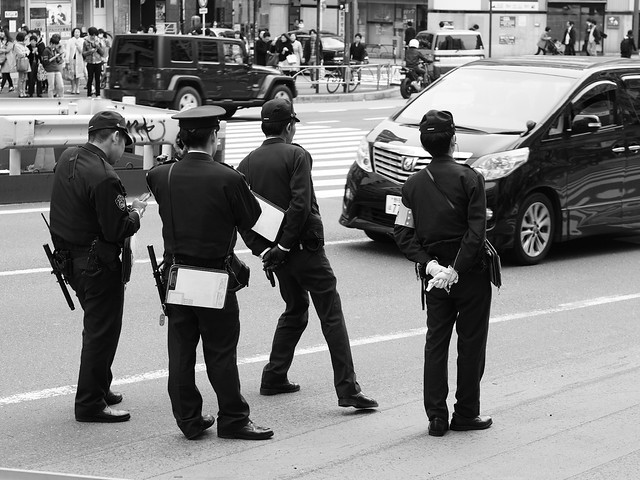 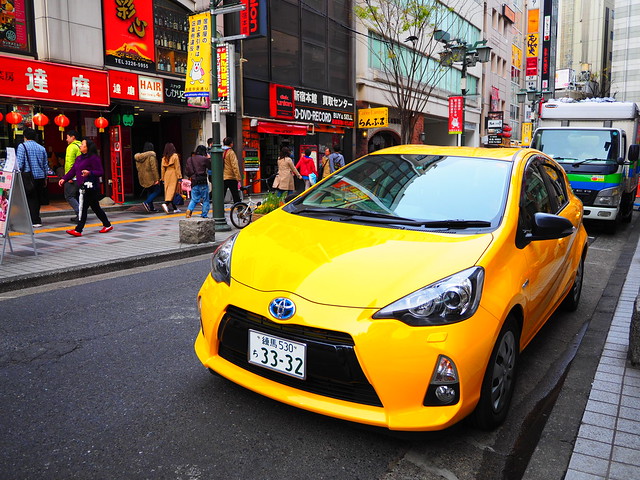 The next-to-last photo is, to me, the Japanese equivalent of a speed trap. I’ve spent years documenting speed traps in Orange County Florida, so my spider sense is well honed when I get near one. And my spider sense went off when I saw the four of them just standing and waiting for something to happen. You know, like in a speed trap.

And the last photo is a Prius, the Japanese version of the Prius C, except in a color I’ve never seen in the US and nicely tricked out. That all-black grill treatment looks really sharp against the neon orange (trust me it was orange, but the art filter I was using at the time pushed it into yellow. Whatever. It looks sharp, and I almost want my next Prius to look like this one).

The most valuable item I picked up on this trip is a printed map of the JR lines, but with all the stations printed in English. Using that map I was able to quickly find the right line and my trip back to Tachikawa was completely uneventful. But I still payed close attention to make sure I got out at my proper station.

Next weekend I intend to head into Tokyo proper on Saturday, then go to Mt. Fuji on Sunday. Maybe I’ll even head back to Shinjuku when I get off work sometime this week. Yes, I feel that comfortable.