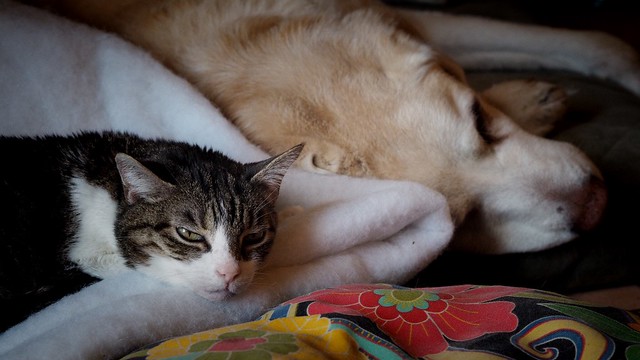 Lucy has been home now for some few weeks and she’s really beginning to come back around to her old self. We’ve been giving her her medications as a liquid that we can load up into a simple syringe and then squirt into her mouth. If you think that pilling a cat is easy, then you’ve not really tried. So we had the compounding lab that supplies our vet give us her medications in solution. It’s considerably easier and faster to give her a squirt of liquid rather than try to get her mouth open and then somehow drop the pill in. 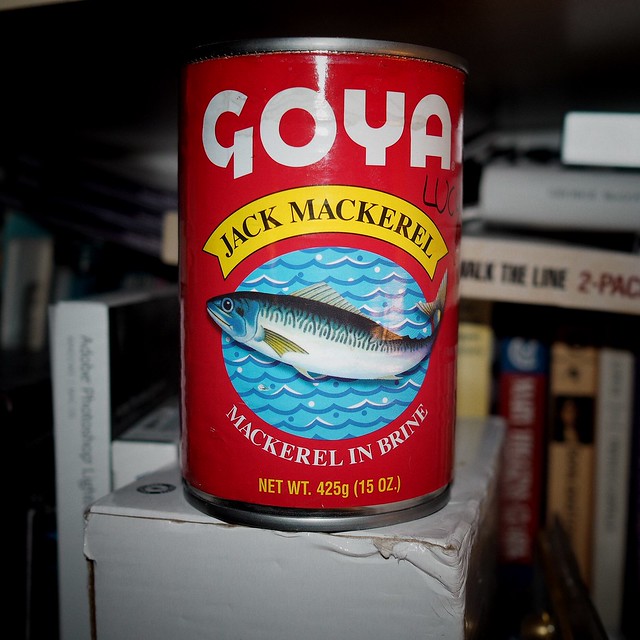 This was the first food I was able to get Lucy to eat after her near-death experience earlier in February. It’s pure fish in brine. It’s great as far as protein is concerned, not so great due to all the salt. But it got her started eating again, and after a time she started to eat other more conventional canned cat foods. 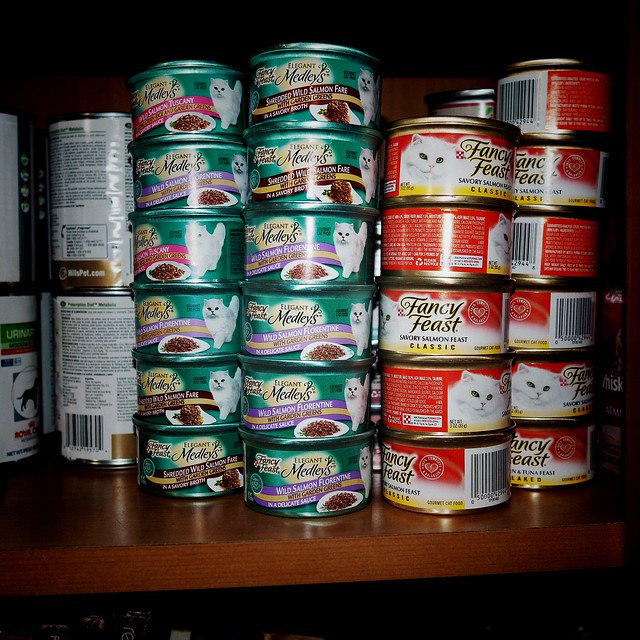 You’re looking at her current stock of food (above). Before she got so ill she used to eat dry food and then all the Fancy Feast flavors. Since coming back from her illness she’s started eating just the regular salmon Fancy Feast, and has now moved on to the Elegant Medleys, all of them salmon based. The Florentine version seems to be her favorite; I can’t get the Florentine version out of the can fast enough for her. With the return of her appetite has been a surge of her eating, at times three to four cans/day. I don’t mind as her weight dropped to 7.9 pounds from a pre-sickness weight of around 11 1/2 pounds. For a time she was gaunt, looking like she did when she first came into the house in 2008.

Hopefully I can get her back up and “running.” I’m going to be on a three-week business trip starting next week, and I need to get her straightened out as best I can.

A New Way of Photographing

All photos were taken with the Olympus E-M10 and then pulled over, via WiFi and Olympus’ OI.Share. Post processing was done with Pixelmator on an iPad Air 2. I then pushed the final image off my camera roll and up to Flickr via Pixelmator. I would have written the complete blog post on the iPad as well, but I can’t seem to be able to link back with the same ease using the iPad as I can using a regular browser (Firfox in this case) on Window 8.1. But I’m working on learning how. The ability to just move photos off the E-M10 directly to the iPad wirelessly is so sweet and easy compared to the elaborate workflow of using Adobe Lightroom. I have the iOS WordPress app installed. I just need to better understand how to use it. Then I can leave the big Samsung Windows machine behind.

Simplification and traveling light while photographing. That’s one of my top goals for 2015.

Kim Stanley Robinson, the science fiction author of the Mars trilogy “Red Mars,” “Green Mars,” and “Blue Mars,” was interviewed on 6 March of this year by Blog Picture Science. In that interview Robinson discusses what has transpired in robotic planetary exploration over the last 20+ years since the first novel came out in 1992, and how that has re-shaped his thinking about the key assumption in his novels, that assumption being that it would be fairly straightforward to terraform Mars.

Now, he believes it’s going to be a lot harder and take a lot longer to accomplish.

His reasons for this change in thinking are based on:

In case you’re curious where you’ve heard about perchlorates, they’re used in high-performance solid rocket motors as well as explosives. In 2013 the EPA started to regulate perchlorate in drinking water due to its adverse effects on the thyroid gland in pregnant women and young children here on Earth.

On Mars, perchlorate concentrations in the Martian soil are estimated at between 0.5 and 1%. That may seem small, but perchlorate adverse effects on humans can be caused by concentrations in the parts per billion range. With all the fine dust on the surface of Mars, there’s no way it wouldn’t get into a Martian habitat and slowly poison the inhabitants. Any permanent one-way colonization effort to Mars would be a trip of death, something that the Mars One effort may not have even considered. Or perhaps they did get the perchlorate memo; contracts to develop the 2018 robotic lander have run out and as of February 2015 were not renewed. This could be as simple as a plain old lack of money, but that lack could have been triggered by someone bright enough to really appreciate the issues Robinson has pointed out.

Further into the interview, Robinson states “[W]e have to make a reconciliation on this planet (Earth) there is no planet ‘B’… the terriforming of [Mars] is too long, it’s really thousands of years and we only have decades to get it together here… [Mars terraforming] can only follow on the first great project, which is sustainability here (on Earth).”

I think we’ve got our work cut out for us right here on this planet. But before you think I’m down on the whole idea of Mars, Know that I’m not. The following video, “Voyager,” came from Robinson’s website. It’s a bit about how we might colonize our own solar system, our own bit of space with all our planets. But we have to make our civilization sustainable on our original world, to preserve this unique planet called Earth. Only then will we have a chance to make it sustainable everywhere else.