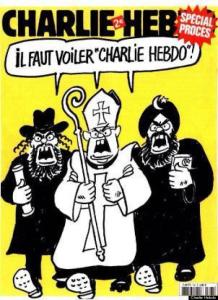 I’ve been watching, along with the rest of the world, the horrific shootings at the offices of Charlie Hebdo in Paris, along with the sympathy killings by another radical “Islamist” that occurred later in Paris at another location.

And now, this morning local Orlando Florida time, comes another report that the German offices of Hamburger Morgenpost were fire bombed for carrying the Charlie Hebdo  cartoons. No casualties, and only light damage to the offices reported. Something for which we can all be thankful.

I am, by way of confession, not an Islamist but a Methodist, a denomination of the Protestant movement, a spin-off of the Catholic church if you will. I was raised in the Baptist church (another Protestant sect), switching to Methodism in my early twenties. I suppose this makes me somehow better. It doesn’t, and here’s but two examples why: Jim Jones and David Koresh.

Killing in the name of God isn’t limited to Islamists or Christians. The Jews, specifically the Israelis, have been raining down death and destruction for decades on the Palestinians.

Nor is this kind of human destruction limited to just organized religion. History starting with WWII has given us Hitler, Stalin, Mao Zedong, Pol Pot (Cambodia Khmer Rouge) and North Korea’s Kim Il Sung (the grand-father of today’s crazed ruler, Kim Jong-un). I have no way to tie these excesses into organized religion, except perhaps the Nazis against the Jews. Mass killings are hideous enough, but wrapping them in the name of God makes them even worse.

What would I do to solve this? If I had some alternative universe and the ability to travel back in time, I’d have written the US Constitution to have outlawed organized religion in any form and more bluntly separated church (or faith) from state along with the current prohibition prohibiting “the making of any law respecting an establishment of religion…”