UPDATE 27 October 2017: This post has been broken for quite some time, ever since Swift 3 was released. I’ve tried to use the Swift tools and capabilities to update it, but I’ve never succeeded and I’ve never taken the time to figure out the peculiarities. Furthermore the site practicalswift is gone, so that link has been removed. 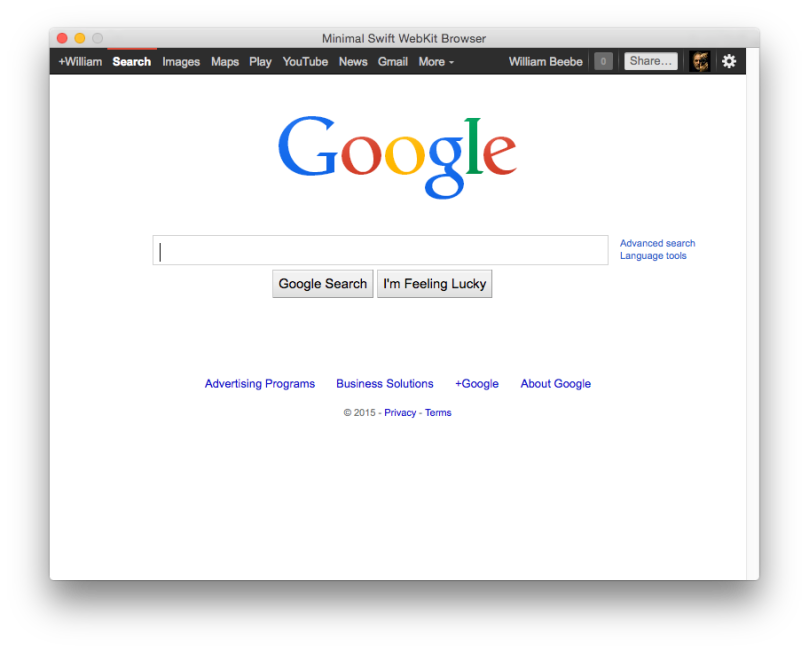 This is little more than a copy of the code published on practicalswift, “How to write a minimal WebKit browser in 30 lines of Swift.” I made several trivial changes to the code so that it would properly execute in my Xcode environment.

There’s a lot for me to learn in these 30-something lines, and a lot of functionality to add. This surely won’t compete with the likes of Safari or Chrome. But it does show how complete WebKit is. I can go to any website via the Google search box and see it properly rendered. Quit an nifty feature when you don’t have to write your own rendering engine.

Also, this particular block of Swift scripting is bound to the Mac and OS X runtime environment. Ain’t no way this is going to be portable to anything else other than a Mac running OS X.

I’ve spent parts of Saturday and today going over Apple’s “The Swift Programming Language,” looking to get a toe-hold on how to use Swift. Using vi and some of the examples in the Swift book, I hacked together a few scripts that illustrate some of the features of the language. I also went out on the web to find a few features I couldn’t find reading the book.

This first example, reading command line arguments, came from the web. I couldn’t find an example in the book (but watch me find it later). Every language, scripting or otherwise, provides a framework for reading any arbitrary number of arguments passed to the application when the application is invoked. What follows is at least one way to read command line arguments in Swift, and what the output looks like when it executes

Comments about the code and the output:

I first came across this on the practicalswift.com website, and it had a more elaborate shebang line (thus the comments above). But the site’s version was written back in June 2014, during the beta period. It’s a bit sad that nothing new has been written on the site since June 2014.

This second example shows a big of class declaration and class inheritance within Swift. This is all written in the same script; I’ve yet to learn how to create separate script/compilation units to be included by a main executable function.

Comments about the code and the output:

There are other scripts I’ve written, such as a largish one investigating the use of dictionaries (associative arrays). The syntax is clean and easy to read, allowing for some fairly sophisticated data structures.

There’s a lot more I need to learn, the most important being how to easily set up file I/O. Other facts I’d like to learn about Swift is how to spawn applications, script interop communications, some possible threading, and how to link to other Swift scripts/classes. But it’s late and the Labs are staring at me for their walks. Time to sign off.