Got another one in the old e-waste basket today. Here is is in all its awesomeness (sarcasm), complete with spelling errors uncorrected.

Attn: Beneficiary,
The United States of America Co-operation Management in Conjunction with United Nation Worldwide are pleased to inform you that you are Among the 10 Winners of our Annual Year Lotto Lottery Conducted in the United Sates of America held on 14th of January 2014.
Your Email Address was Attached to Serial Number S/N-00221 and Consequently Won in the First Lucky 10 Winner’s Lottery Category.
You are therefore been Approved to claim the Sum of Usd$6,500.000.00 only (Six Million Five Hundred Thousand United States Dollars) only payable in wire Transfer from Jp Morgan Chase Bank New York City 2469 Hempstead Turnpike East Meadow, NY 11554-1155. Be informed that every arrangement regarding your payment through Telegraphic Wire Banking transfer has been made by our mangement.
You will have to re-confirm your full information which will be used to set up the account on your name here in the JP Morgan Chase Bank New York 2469 Hempstead Turnpike East Meadow, NY 11554-1155
Full Names:
Your Complete Address:
Scan copy of your personal identification
Direct Telephone Number:
Mobile Number:Present Occupation:
NOTE: That you are requested to claim your prize without any further delay.
Thanks for your Co-operation.
Mr. James Dimon CEO
Address: 2469 Hempstead Turnpike
East Meadow, NY 11554-1155

Things must be really tough at JP Morgan when the best their CEO can do is a Google e-mail address. 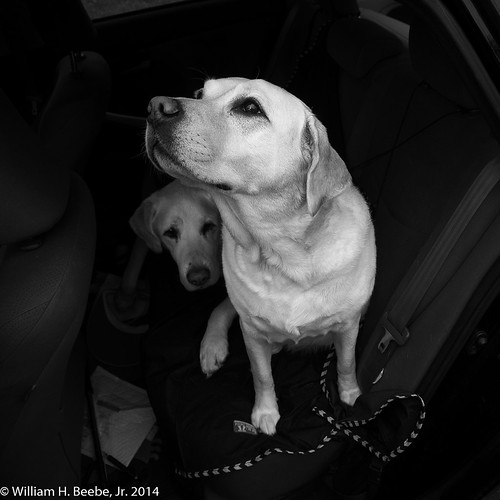 This is a second photo from the Lab’s trip to McDonald’s yesterday. Any dog I’ve ever known or known about loves to go for car rides. The labs are no exception. When they know we’re going out, especially my wife, they’ll stand at the kitchen door looking up expectantly. Now that our children are out in the world, their chances of going on a car ride are a lot higher than before. Their chances of rides depend on the season, with the least number and shortest times in the height of summer; we never leave them in the car, even if the air conditioning is running, from July to mid-September.

This photo was taken with the Olympus E-M5 and the M.Zuiko 12-50mm kit lens and is JPEG Large Fine straight out of the camera. The kit lens was zoomed out to its widest at 12mm (e24mm). I stepped back a bit and centered on Ruby, then stepped to my left to pick up Max’s face (Max goes in first, an alpha to the end).

The exposure is a custom monotone, with contrast set to -2 and sharpness set to +1. The gradation is set to high key. The reason it looks low key in this exposure is because exposure is set -1 to drop the background shadows to a rich black. I was able to “pre-chimp” the look using the E-M5’s excellent electronic viewfinder. Going high key in-camera and manipulating exposure in this way gives me the “look” I want without having to play with the exposure sliders in post processing. The only thing I did in post was to crop, scale, and add my watermark for the web.

That leads to my second revelation. In digging into and growing comfortable with this camera, I no longer shoot just raw, or JPEG plus raw. I now shoot just JPEG, specifically Large Fine, the largest JPEG possible. Even with that level of resolution, a 16GB card is capable of holding over 1,800 images. With my style of photography that means I can go an entire week without having to change cards.

It’s interesting how I’ve come around to just JPEG these days. When I started using digital cameras, all I had was JPEG. When I purchased my first Olympus, the E-300, in 2006, I kept to JPEG because I couldn’t afford a copy of Lightroom (back in those days it was hundreds of dollars/copy, not the free giveaway with camera purchase it is today). When I finally bought Lightroom, it was in 2009, and it was marked down to half price. I bought it to use with my E-3 in order to handle my sister’s wedding that October. Once I started using Lightroom I toggled into using raw exclusively. Five years later I’ve just now come back around to using JPEG (almost) exclusively with the E-M5. The JPEG engine in the E-M5, with proper handling, is that good if not better.

Why am I doing this? Four reasons:

A final comment about the 12-50mm: it seems everyone on the Internet loves to trash this lens (along with the M.Zuiko f/1.8 17mm) for absolutely no good reason other than to attract eyeballs to their web site. I have both and they’re both excellent. I’m here to tell anyone that’ll listen that the 12-50mm is as good a kit lens as you’ll find on any camera of any sensor size for any price, providing incredible utility for both still and video. It’s environmentally sealed, and when on the E-M5, makes for a compact and resilient documentary photographic tool. It’s often asked what single lens and camera would you take if that’s all you could take, and my answer would have to be the E-M5 and the M.Zuiko 12-50mm zoom.