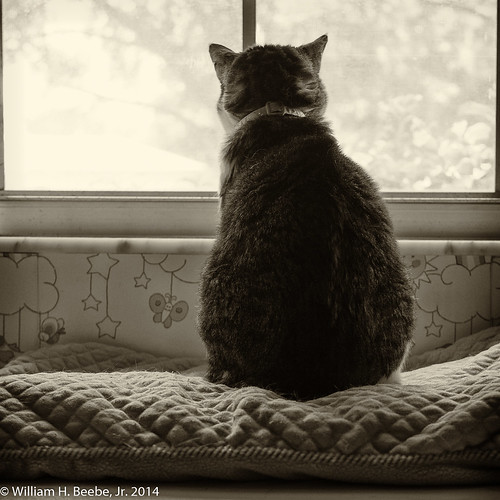 I’m still entranced by cats. Cats came into my life in a permanent way very late for me, some seven years ago. After spending over two decades living with Labs, having cats turned out to be something of a shock. Not in a bad way, but any way at all. I’ve never ever thought of myself as a “cat person,” but here they all are, here and in Gainesville and Tallahassee. My oldest daughter has two and my youngest has one, and considering getting a second as a companion for the first.

I don’t know how it turned out this way, but Lucy, the last to arrive at Casa Beebe, is my cat. She comes into my lap, sleeps next to me at night on occasion, and purrs like a motorcycle when I rub her head. From time to time she attempts to talk to me. She loves it when I pull out the laser pointer for her to chase. When she needs to visit the vets I’m the only one she will allow to take her. She even misses me when I travel, sticking close when I get back from my trips. 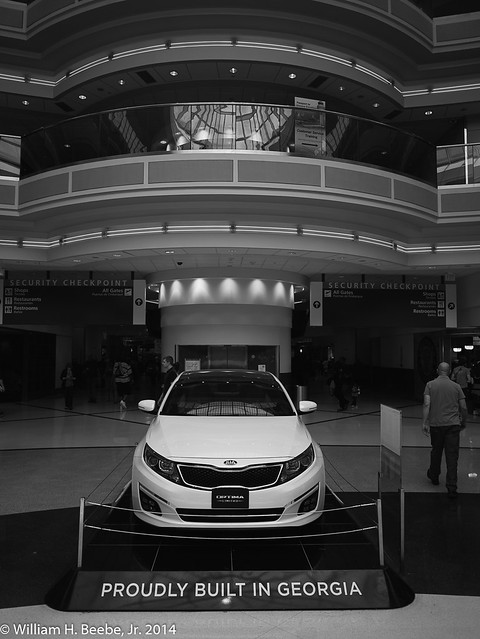 On the way back home I traveled the same route in reverse; my parent’s home to the Doraville station, then cross Atlanta on MARTA to Hartsfield. It was while I was waiting at Hartsfield that I came across this scene that seemed to sum up some of my thoughts and observations on Atlanta.

For example, that Kia sitting in the main part of the airport points out what has changed with regards to auto manufacturing in Georgia. From 1947 to 2008 GM’s Doraville Assembly plant pumped out Olds and Pontiacs, primarily for the southeast region. It made a lot more sense to make them local to the booming Atlanta market than to build them in Detroit and then ship them cross country. The plant, shutdown and empty, sits next to the Doraville MARTA station. The Kia plant is south of Altanta in 85, near the Georgia/Alabama border.

And Doraville itself is no longer “a touch of country in the city,” the way the Atlanta Rhythm Section sang about the community forty years ago in their 1974 album “Third Annual Pipe Dream.” It has instead become part of the vast urban sprawl that covers the entire metro Atlanta area; gray concrete, worn asphalt roads and parking lots, innumerable strip malls, pine power poles strung up with power lines everywhere, punctuated with entrances to old neighborhoods. I miss the Doraville of forty and more years ago, but there’s no going back to it these days. Like they say, you really can’t go home again.